Bearing of the Gulf Stream

About 18 miles offshore of Miami are a series of seamounts and valleys in 1,000-2,000 feet of water that are often referred to as the sword grounds. The Gulf Stream is almost always moving to the north offshore but the angle of the current does vary. On some days, the current is pushing hard inshore. I have seen the current move at about 350 degrees, a touch to the west of north. On other days, I have seen it move at about 20 degrees. When fishing a mile long drift, this 30-degree variation can have major consequences when trying to line up with a spot. If the current is moving at about 15 degrees, expect longer drifts. If it is moving at 350 degrees, expect shorter drops and anticipate the inevitable as you get pushed shallow.

In addition to variations in heading, the Gulf Stream also varies in speed. I have seen 0 knots of current on the sword grounds. I literally had to point the boat to the north and bump to cover ground while swordfishing. This is common in the Gulf of Mexico but not off Miami. I have also seen the current absolutely ripping at nearly 5 knots. The speed of the current can dictate the diameter line you use, the amount of lead deemed necessary, and how you fish a spot as your bait scopes out. The Gulf Stream can be very unforgiving so it is inevitable that you will snag bottom on occasion. Regardless, using the correct tackle based on the conditions can help make or break your day. Heavy current means lighter braid and heavier lead.

The West Wall of the Gulf Stream

When fishing on the edge for sailfish, the Gulf Stream is the primary factor that influences the fishing. The Gulf Stream usually moves to the north but the west wall of the Gulf Stream (Miami side) does fluctuate east and west. The location of the west wall is very hard to predict. This body of water is always moving and is manipulated by a variety of conditions including local winds, bathometry of the coastline, tides, and more. If you have a full moon low tide for example, the west wall of the Gulf Stream may be pushed out to 500 feet off Government Cut. If you venture further to the south off Triumph reef for example, the Gulf Stream may be in 80 feet of water. When the Stream is pushed in tight to the reef, so are the fish. You are much more likely to raise sailfish when there is blue water and current in 100 feet of water than 400 feet of water. Judging the current and making a quick run north or south can make or break your day of fishing. Understanding how tides and the angle of the coastline effect the position of the Gulf Stream can be a major asset as a captain. This is true anywhere with different spots off Palm Beach and the Florida Keys having their own subtleties.

The west wall of the Gulf Stream can be anywhere from 5-20 miles offshore while dolphin fishing during the summer. Dolphin prefer blue water and strong current. During summer we usually won’t start fishing until we are well into the Gulf Stream. The edge of the stream can also be a great place to start. The biggest weedlines and concentrations of floating debris can often be found on the edge of the stream. 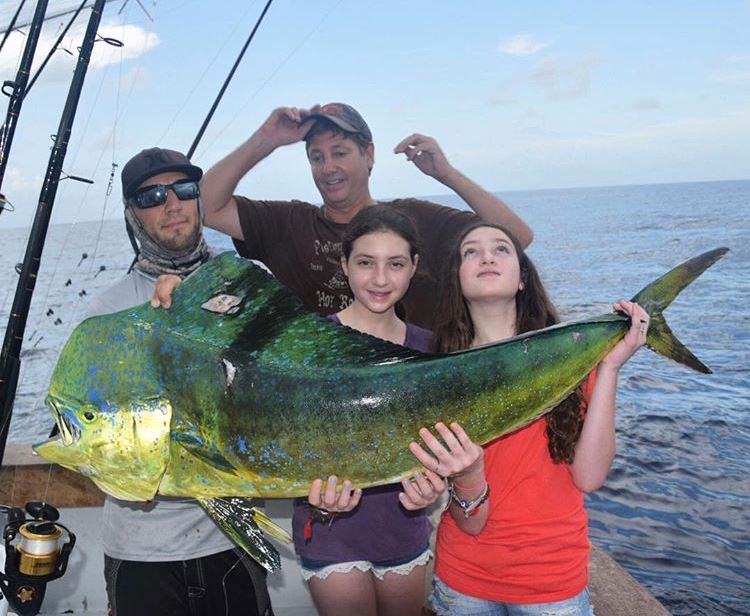 Mother Nature will have her way

The Gulf Stream does have a mind of it’s own sometimes. I can’t tell you how many days I have left the dock after a big winter cold front with north wind and high expectations. Unfortunately you may be greeted with green water and south current on the edge. Whether there was an eddy in the Gulf Stream or west winds pushed the current out doesn’t matter. If you have green water and south current expect a long run to a more promising area or a slow day of fishing. As a charter boat we are relatively limited by time and budget on some days and have to make due with the conditions we are dealt. This is why I always recommend a full day fishing charter for the flexibility.

If you have a less strict fuel budget and more time on your hands, broaden your horizons. Green water may shut the bite down off Miami but Palm Beach may be on fire with the Gulf Stream in tight with tailing conditions. If the wind is more easterly and the current is moving down in the Keys, the bite may be better to the south. Understanding the weather patterns, ideal conditions in certain areas, and having a good network of reports in different areas can help you stay in the bite all winter long if you have the mobility. This is especially important in multiple inlet tournaments. The sailfish may be swimming south but the best bite may slowly move north as the current pushes from Miami to Palm Beach over a 3 day period.

Satellite Charts Such as Fishtrack

When fishing further up the eastern seaboard, there are sometimes major temperature breaks between coastal waters and the Gulf Stream. By looking at a current chart you may be able to know if you will be running 20 or 60 miles the next day and plan accordingly. Off Miami for example, the positioning of the west wall of the Gulf Stream can move around very subtly while dramatically affecting the fishing. The difference of a few hundred yards east or west may push the fish and bait into 100 feet or deeper into 300 feet. With a dynamic, constantly moving current it can be hard to predict where the best fishing will be. Learn how to use the tools available to you and adapt to the conditions.