Bonita Fishing - How to Catch Bonita

Many fisherman in South Florida put down the humble bonita, regarding it as a trash fish. We beg to differ. Many slow days deep-sea fishing offshore have been saved by the lowly bonita. They may not be great on the table but bonita fight as hard as anything, are willing to eat just about anything.  Bonita are schooling fish and can create chaos in the cockpit in short order. Hooking 7 at a time can and will happen. Live bait, dead bait, artificial lures, jigs, and soft plastics can all be productive when targeting boneheads. Bonita are usually a nuisance when kite fishing for sailfish, but they serve as great practice for beginners trying to improve their form. Bonita also make great targets for practicing light tackle fishing in Miami. Bonita range in size from 9" bullets (great bottom and swordfish baits), to 20+lb monsters. They can be caught year round though the largest quantities are found in late spring through summer. Big bonita are often mistaken for blackfin tuna, but both fish often swim together so their presence isn't always a bad sign. 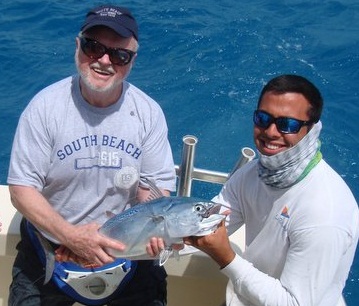 Where to Catch Bonita

Little Tunny aka Bonita can be found as shallow as 15 feet and as deep as 300 feet off Miami.  They are the most common tuna species in the Atlantic Ocean and range from New England to Brazil, the Mediteranean to southern Africa. Like other tunas, they inhabit a variety of depths in the water column and forage on the surface as well as near the sea floor.  Despite their wide range and classification as a highly migratory tuna species, they are far less migratory than the other tuna species.

Bonita are not regarded as quality table fare by most anglers.  Their meat is dark red in appearance, oily, with a strong flavor.  Some anglers  will smoke bonita to make fish dip or tuna salad. (We do not recommend)  Instead, try using bonita for bait.  Cut as strips or chunks, a wide variety of fish can be caught on bonita including: mackerel, snapper, wahoo, mahi, sharks, and swordfish.