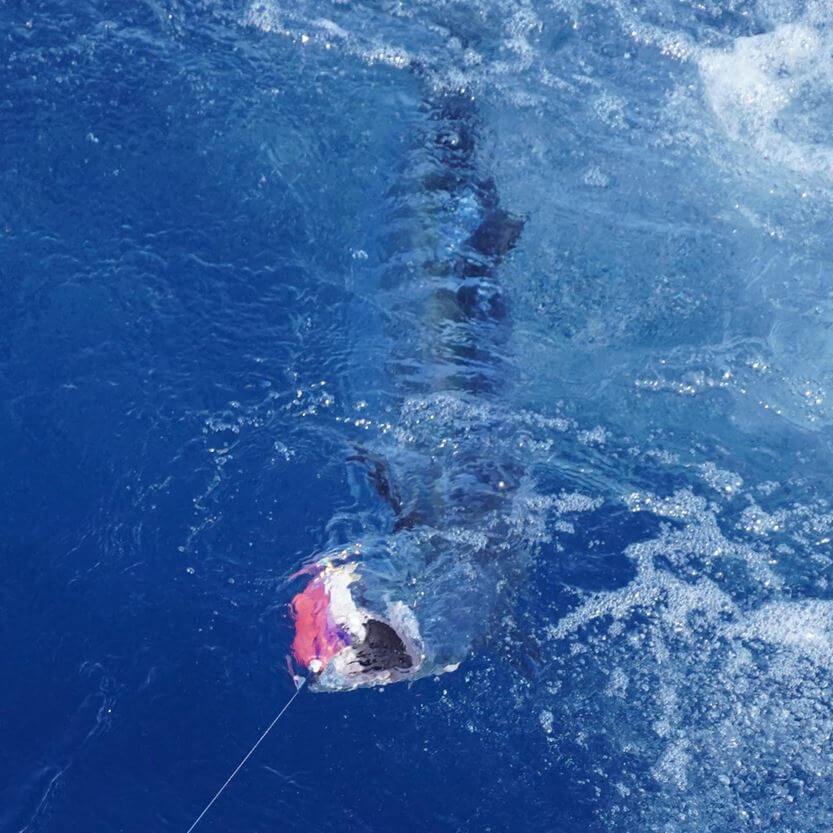 Read the Article and Buy what you need below

Before reading into wahoo fishing with planers, I recommend checking out the article written about Planer Fishing Fundamentals. The rigs and techniques have some definite similarities so it helps to cover the basics. In addition, feel free to check out our species write-up on Wahoo.

Unlike kingfish, wahoo have very distinct color patterns. These fish have neon blue backs and white stripes. I truly believe they have better camouflage than almost any fish. When you are bringing them to the boat they blend seamlessly into dark blue water. Until they end up on their sides and you see stripes, wahoo are tough to make out in the water.

The color pattern on wahoo is important to consider because like all fish, they have a distinct niche for which they are adapted. Wahoo blend in best with dark blue water. As a result we often look for blue water and current when we are targeting wahoo. The Gulf Stream fluctuates off of South Florida. Some days it is in 80 feet of water and some days it is in 1,000 feet. Wahoo seem to follow the current and the bait. There is no limit to the depth they will travel but we like to focus our efforts in the 200-350 foot range. We only troll for wahoo when we see blue water and north current. I have caught them in all conditions but it is better to assess the hand you are dealt and adjust accordingly. If the edge pushes in shallow, it is not uncommon to catch wahoo in water as shallow as 100 feet. As a rule of thumb however, they usually swim near reefs and drop offs in the 150-600 foot range. 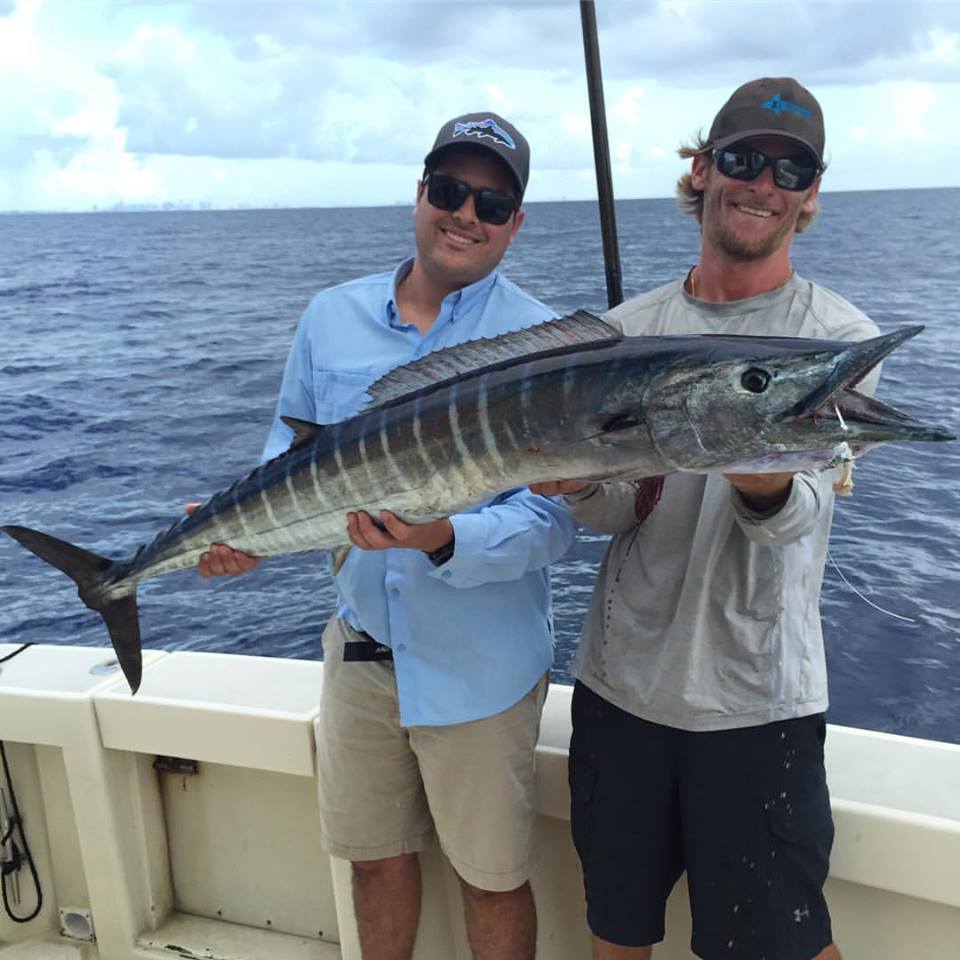 Planer fishing for wahoo involves an approach similar to the techniques we use for kingfish. The main difference is that we increase the speed to at least 8 knots while wahoo fishing. Wahoo are one of the fastest fish in the ocean. High speed trolling can be very effective for them but this technique eliminates most by-catch. High speed trolling is great in areas where wahoo are the only species you are targeting (Cay Sal, San Sal, Bimini, Chub Cay). Off of Miami however, wahoo are a treat rather than the norm. When you deploy a spread with 2 planers and 4 surface baits, you can target a wide range of species in addition to wahoo. This is our go-to method because it allows us to target a mixed bag of gamefish.

On the deep lines (planers) we like to fish big strips with double hooks as well as ballyhoo under sea-witches or island lures. Drone spoons can be very effective as well. We usually use 50 feet monofilament leaders to get more bites but it is acceptable to put a trace of wire or cable to prevent cut-offs. You may get fewer bites but the wire sure helps calm your nerves when you hook a big wahoo. Unlike kingfish, wahoo are sometimes as likely to eat a rigger bait as they are a planer bait. Covering the water column is crucial but don't neglect any aspect of your spread. Always work the natural drop offs along the South Florida coast and look for baitfish on the surface or on the depth finder. Flying fish, blackfin tuna, bonito, and more are all prey for wahoo. If you find some life, you'll usually find more fish.

Wahoo often school just like many pelagic species. Double headers and triple headers are not uncommon (especially in the Bahamas). If you hook a fish I highly recommend circling the area because there may be more fish around. When it comes to time of year, wahoo can be caught year round. If I were to pick the best time I would choose to fish near the new or full moon. These moons have big tide changes and can really move some water around. If you find a nice color change with blue water on one side, you are getting warmer. Summer and fall full moons are a great time to target wahoo specifically. Like many fish, put in the time and you’ll be rewarded. Good luck! 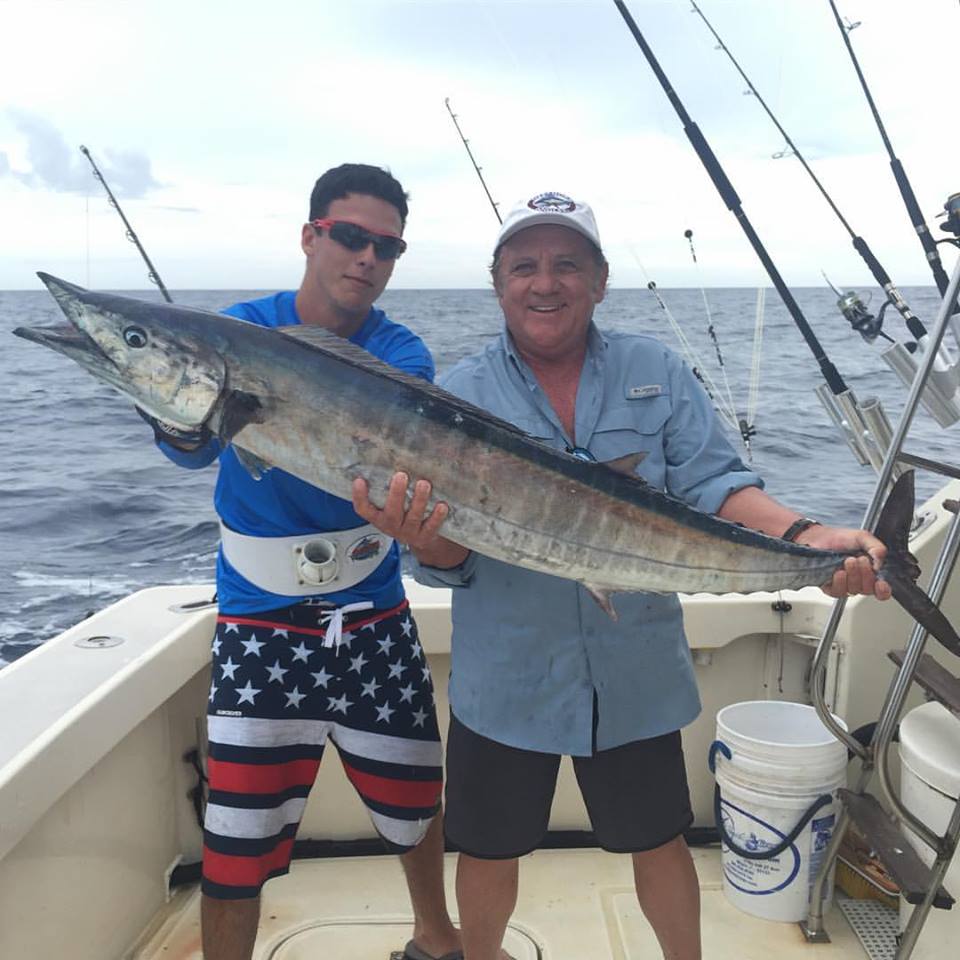