With winds picking up and clocking towards the north, we had high hopes for the morning. It was a chilly november morning--just the ticket for sailfishing. We got out to bug at the crack of dawn but baitfishing was not easy today. We slayed the runners but we caught the tide too early for herring. We managed two small herring and a spanish sardine with 3 dozen runners--not our preferred well full, but it would be suffice. We headed east and in short order we were kite fishing Key Biscayne in 130'. Winds weren't so bad just yet, probably around 12 mph, but the seas were 4-6 and rolling. As the day wore on the seas stacked to solid 6' with some larger waves thrown in.

Unfortunately, the wind remained out of the NW for the majority of the morning, so there was less than a knot of current on the edge. Soon after setting the spread, a big hammerhead shark cruised through, but was uninterested in our baits. After watching him submerge, the right long got clobbered and steve came tight. 10 minutes of battle brought a feisty 4' reef shark boatside. We reset the long and carried on along an edge in 120', where things got a little interesting. A lit up sail attacked the right short bait, the spanish sardine, and inhaled it. Captain John dropped to the fish and got our angler hooked up to a feisty little sailfish. As we chased the fish, we dragged our ktie baits looking for a double hookup. A pair of dolphin obliged us as the ate the remaining two right kite baits. Everybody loves Chaos! Well after a short while we got the dolphin boatside just as the sailfish cooperated. After that release, we saw the seas building higher and decided to call it. 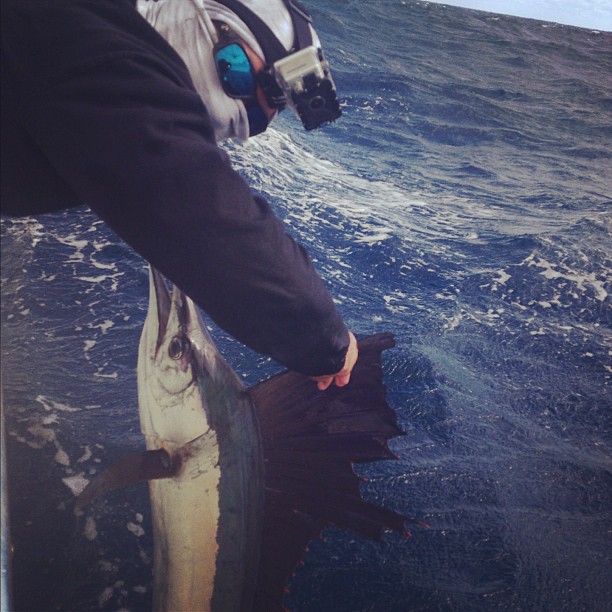