We headed out after a late start. We had high hopes given the moon condition and time of year. There were decent reports to the north from a week prior and we were pretty optimistic about our chances of catching a Swordfish. The wind was light and variable which would end up being a bit of a curse but it certainly made for a tranquil night. Swordfishing in Miami at night is a very effectve way of connecting with a swordfish when the rise nearer to the surface to feed.

We got to the grounds and set our spread. At first the winds were out of the south but after setting the spread they switched to the west with a nearby storm. This blew us a bit off the numbers and after a long unproductive drift we reset a tad shallower.

Our next drift was a bit more interesting. We were lined up perfectly and got the spread oriented accordingly with the northeast wind. As we approached the numbers, the anticipation increased as we all knew the general rule of thumb while swordfishing. Sometimes the fish are there, sometimes they're not. Out of the silence, the 50' bait ripped off drag and went slack. We gave it a few more minutes and checked that bait. The bait was torn up and the line was billed up... We always sew up the baits but this time it didn't even matter. The fish hit aggressively enough were the bait wouldn't hold up regardless. A skirt might have helped but they make for less natural presentation at night. It's easy to have a short memory sometimes while fishing because 5 minutes further into the drift, the 150' buoy knocked over. We came tight and were hooked up.

This fish took off on a small run after the initial hookup which usually suggests that it's not a tiny pup. We cleared the lines and worked him to the boat. He was relatively cooperative and took one last run after seeing the boat. We finally saw color and confirmed the species. We eased him toward the gaff and got him in the boat. 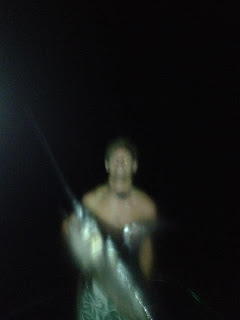 The picture quality wasn't too hot (iphones are mediocre at night) but it was about 70 pound fish and measured 55'' ljfl. Not a biggie but about average for nighttiming. We were pretty happy with our results and called it an early night. We were fairly confident we could have produced another fish if we repeated the drift but unfortunately we had plans to go daytime swordfishing the following day. Swordfishing in Miami can produce fish of sizes ranging from 30lbs to over 500. Though large swordfish are caught at night, larger fish tend to be caught during the day. Regardless, night time swordfishing in Miami is an exciting big game fishery right off Florida's coast. Final tally- 1 sword around 70 pounds.