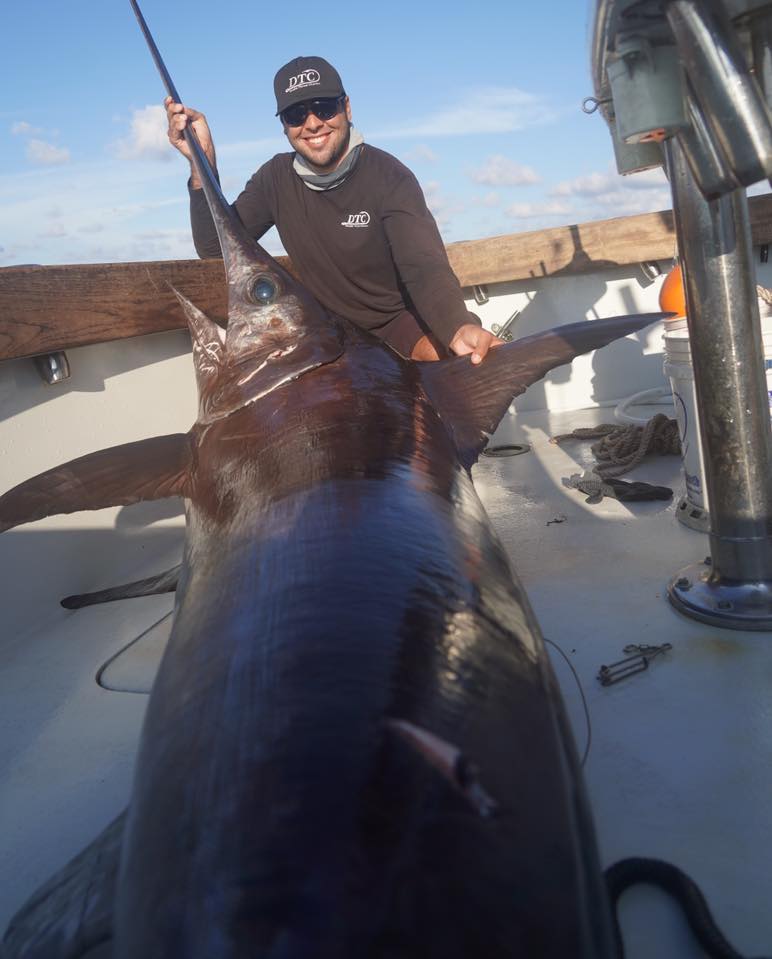 Aptly named the gladiator of the deep, Swordfish populations have rebounded immensely since their near extermination in the 70s. Tightened legislation on long lining helped stocks rebound, especially in the Florida Straights.. Swordfishing Charters in Miami can have very different settings, either day or night. This is big game fishing at its finest where heavy tackle is a must. Swordfishing requires a bit of patience and commitment but we've definitely had plenty of success. This is a bucket list fish that fights hard and tastes even better.

These are apex predators that occupy a very unique ecosystem. They prefer deep water near canyons and valleys in the 1200-2000 foot range. On the surface, areas like this may appear like no-man's land. Down deeper however, there is a thriving ecosystem of squid, deep-dwellers I can't even name, and more. Swordfish fall under the category of vertical migrating species. They are highly migratory and it's difficult to know where the fish move due to a lack of tagging data. What we do know however, is that they come near the surface at night and prefer feeding near the bottom during the day. 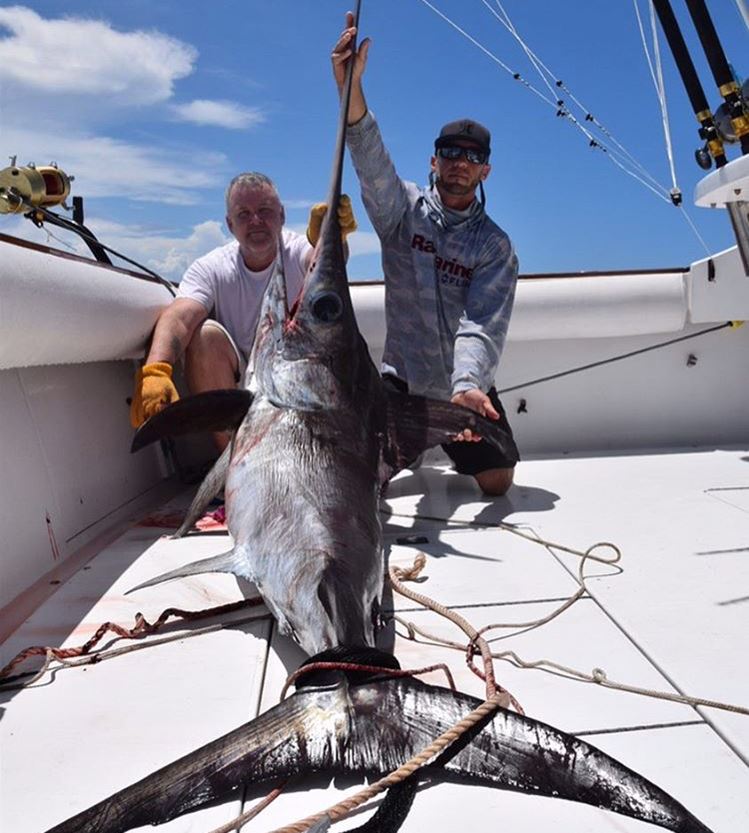 In the world of a swordfish, they nearly always prefer little to no light. This is why they travel deep during the day to stay in their comfort zone at depths the light can't penetrate. Swordfish definitely go through cycles but they do feed 24/7. They are extremely sensitive to light because in their ecosystem, light = food. When they see a flashing light with a bait nearby, they are almost always ready to ambush.

Daytime swordfishing is no longer a new technique. It has been popular for over a decade and has emerged in different regions as an effective way to target broadbill swordfish. Daytime swordfishing was initially discovered in Venezuela before making it’s way to the Florida Keys and South Florida in the early 2000s. It has since emerged throughout the Eastern Seaboard, Gulf of Mexico, Europe, Caribbean, and New Zealand. South Florida still remains a premier destination and yields some of the most productive swordfishing year-round.

To understand the emergence of daytime swordfishing, you need to learn a bit more about the species itself. Broadbill swordfish are a highly migratory species that move around tropical regions and even push into temperate climates. In the Atlantic alone, they range from as far south as Venezuela to as far north as Nova Scotia. This is an impressive range of latitudes but what may be more impressive is their vertical migration, one that takes place on a daily basis. 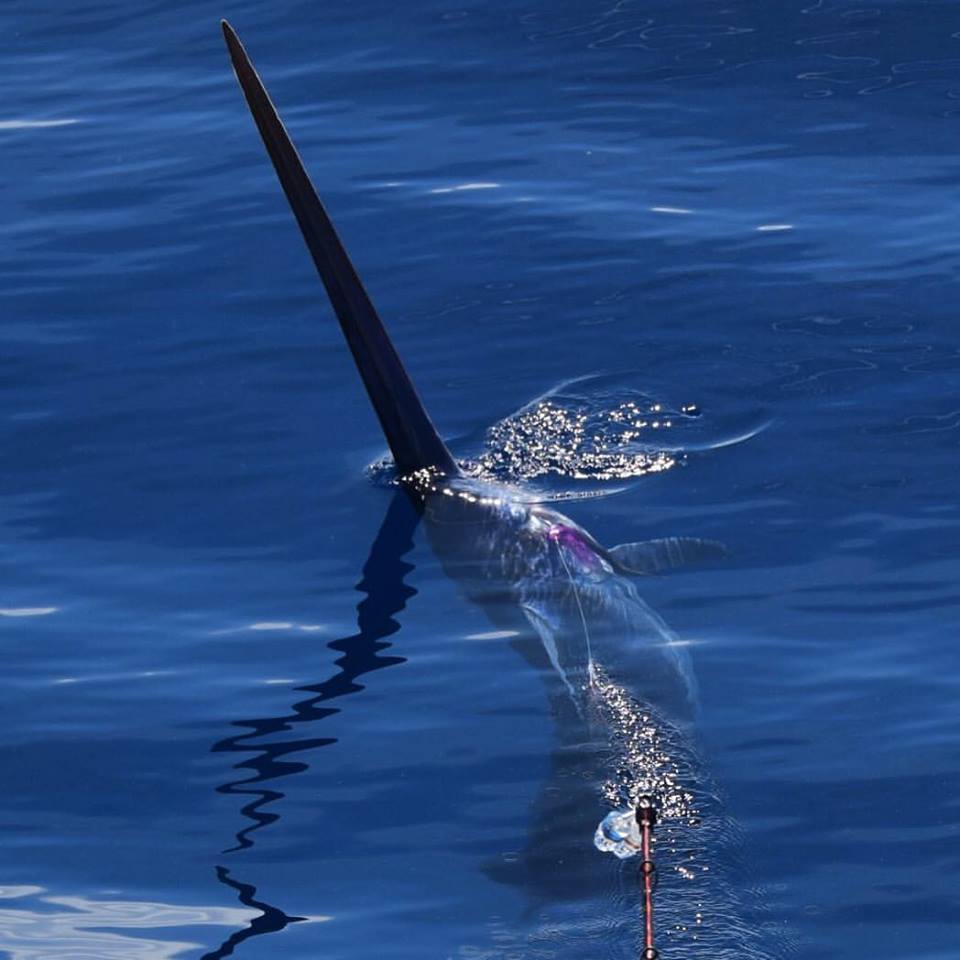 This is one of the greatest migrations in the world when you consider the volume of biomass that moves on a daily basis. Trillions of bait fish in the form of krill, shrimp, squid, spend a majority of their time in the dark. At night, they make their way to the surface but during the day, they move back toward the bottom. These bait fish are shy when it comes to light so they are almost always deeper than 600 feet during the day where light almost never penetrates. Many species inhabit the “midnight zone” where sunlight never penetrates while other inhabit the “twilight zone” where sunlight decreases with depth.

Swordfish migrate throughout the midnight zone, twilight zone, and even sunlight zone where they occasionally sunbathe on the surface. Their anatomy gives them unmatched versatility as a predator. They have an adapted heating organ near their eyes that allows them so stay warm and hunt in waters as cold as 40 degrees near the bottom of the ocean. What’s even more impressive is how they can quickly rise to the surface without suffering from the adverse effects of the changes in pressure.

Between the range of latitude and depth swordfish inhabit, these are truly one of the most versatile animals in our oceans. There are few parts of the planet they can’t reach.

Fishing during the day is a unique affair. Daytiming for Swordfish in Miami is very rigging intensive. It involves sending a single bait on an extra-long leader to the bottom, with 8-12 pounds of weight. Thin diameter braided line is used to maximize line capacity and minimize drag so you can reach the bottom and feel the bite. Heavy tackle is employed to deal with the stresses of hooking a 100+ lb fish in such deep waters. We use a Hooker Electric 80 wide with a manual assist to target daytime swords. We often fish a second, "buoy rod" as well which is usually an LP-S1200. . While some people have transitioned to electric reels for targeting swordfish during the day, we like to have both options for our customers. Daytime swordfish average 100lbs and are not uncommon to 300lbs. Daytime swordfishing off Miami yields larger average fish and a butal fight. There isn't much bycatch on the bottom in 2,000 feet but we have caught thresher sharks among other species.

We typically recommend daytime swording charters if you're looking to knock them off your bucket-list. Swords are typically a bit more concentrated near structure during the day. We have done the math and we usually get more swordfish bites per hour of fishing during daylight hours. Additionally, there is more opportunity for by-catch while on route and returning from the swordfish grounds. Schools of dolphin, tuna, and more are always a possibility. Summer swordfishing can be great but we prefer weather windows during fall and winter. 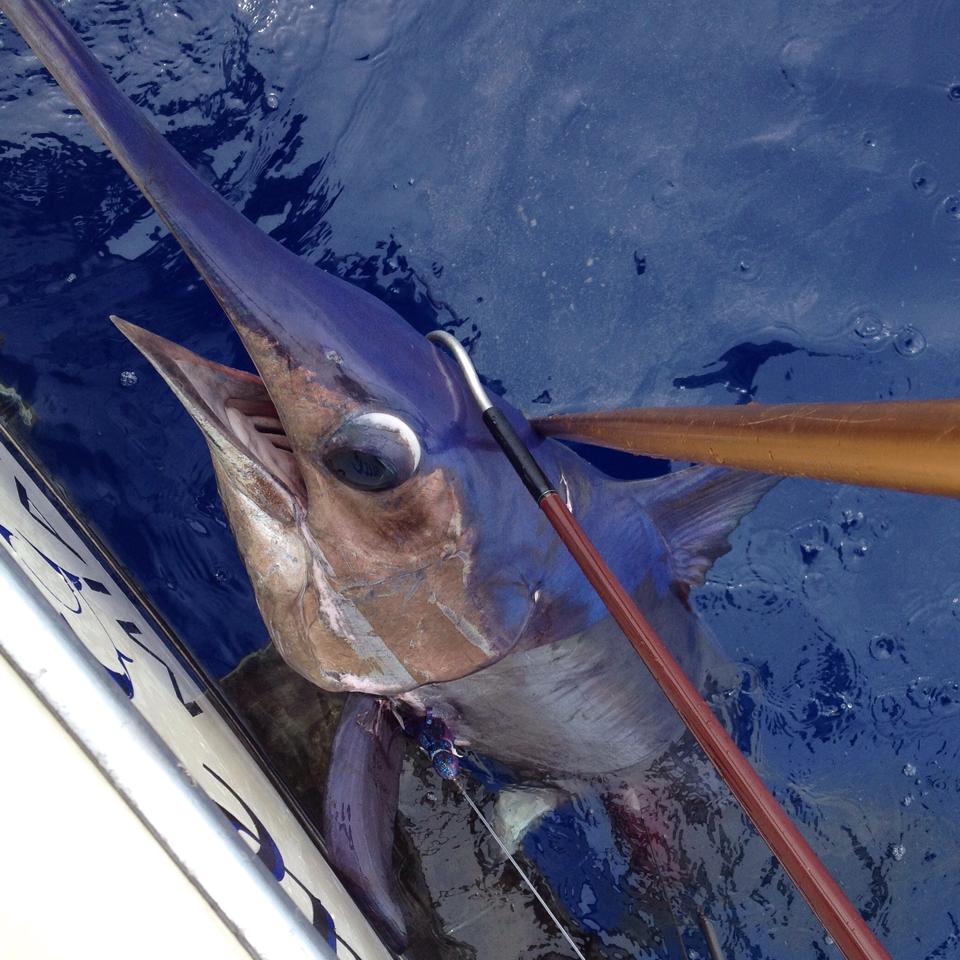 Nighttime swordfishing is very different from daytiming. At night, we typically drift 4-6 lines over numerous humps and canyons offshore of Miami Beach at night where swordfish are known to congregate around to hunt. Rigged squid and live bait are the baits of choice. Baits are rigged to drift at differing depths throughout the water column, from the surface down as deep as 350'. Swordfish rise nearer to the surface at night (these areas are over 1200' deep) to search for bait schools. Depending on the moon phase we tune our baits to the appropriate depth and zero in on the fish. Hooking into one of these animals at night will make for the memory of a lifetime. Swords at night average about 60-100 lbs but fish of much larger proportions are always a possibility. 500 pounders eat the same baits as the smaller fish, so you never really know what's on the end of your line until you are well into the fight.