Well after having a blast last weekend, the owner of the 36' Contender wanted to go look for dolphin again. We left the dock at about 6:30, filled the wells with pilchards (still holding strong off the mark east of Bug) and headed ESE looking for signs of life (the typical start to most dolphin fishing charters in Miami). A 12 knot Eastern breeze kicked the sea up a bit, but it was still a beautiful day on the water. The plan was to look for flotsam, birds, or signs of fish, and pitch livies to the fish. The owner preferred not to troll so an array of spinners were rigged and ready with 5/0 matzuo j-hooks and 10 ft of 50lb Ande leader.

Running and Gunning for Dolphin

At about 730 we spotted our first few birds working a sargassum line in 1100'. There had been plenty of weedlines, but no life to speak of up until that point. The birds were holding over a small pod of schoolies so we got the skunk off the boat early with a nice triple header of 6lb fish. We worked the school but the other fish were smaller schoolies so we let them go to grow bigger.

For the next hour we came across a few pieces of floating debris that held bait, but no fish (we dropped jigs deep looking for wahoo but had no takers). At 9am we found a 6ft piece of barnacle encrusted bamboo as thick around as a baseball bat. A fat tripletail was holding on it but refused to eat livebait, dead bait, or jigs after numerous casts. The bamboo was holding plenty of dolphin though. Another four 5lbers came aboard, and a few others were released to fight another day.

At 1045 we came across two working frigates in 1200' that were very very excited. We dropped live baits on a path to intercept the birds (and fish under them) and were obliged with a quick hookup. Another 3 lifters came aboard when two bigger fish passed through. I casted two baits infront of them, but as they turned to eat the smaller fish beat them out. They faded into the depths and never gave us a second chance.... Our fish count at this point is 10 keepers, and another 6-8 smaller fish. With time waning, we headed in a bit only to find another pod of birds working the largest school of dolphin I've seen off South Miami. They were everywhere. We bailed dolphin for two hours when their arms grew tired. We only kept two of the 26"fish, releasing the other cookie cutters to grow larger. After growing tired of catching the schoolies, we called it a day and were back at the dock at 130. 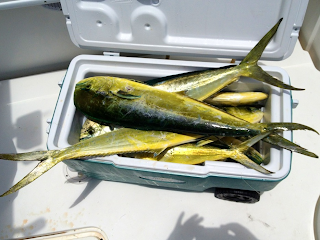 Final Tally--12 Dolphin from 4-8lbs with another 30+released.