Dolphin Fishing at Night in Miami

With a group of bachelors and a full crew the Blue Yonder headed offshore to find some fish. We had an entire afternoon and night planned out for the lucky group that booked our full day trip, and it entailed a lot of different techniques. We stopped at bug and tried to get some last lively baits for the kite (we had a full livewell of chummers but they werent looking so hot). We headed offshore at about 630 with a couple dozen more livies and popped the kites up in 180 to begin the waiting game.

About a half hour into our drift a big bonehead slammed a deep jig, succesfully wiping the skunk off the boat. Flyers started showering off our left kite soon afterwards with football blackfins in hot pursuit. Our long got slammed and after a short fight a nice little blackfin made his way to our cooler. The guys were excited about the action and when we got the kites reset, things got interesting. 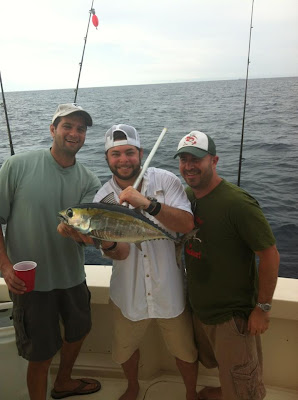 One of our flat lined spinners had a few inches of mangled line from the earlier bonita so Feder decided to mend the line with the bait still in the water. About thirty seconds into that endeavor (while he was halfway done with the knot) the rod began to arc as a fish took the bait. One of our guests grabbed the line to give him a bit more time to finish tying the knot, and just as he cinched the knot tight, the line burnt through our guests hands as the fish took off. It turned out to be a sail, who did his dance as Feder came tight. After handing the rod off to the lucky bachelor aboard, another sailfish came up on our right short bait, but stole the pilchard without finding the hook. With that, the lines were cleared and we chased the fish before heading offshore to the sword grounds. A solid fight had the fish boatside (though still green), but she was tagged, photoed and released none the worse for wear. 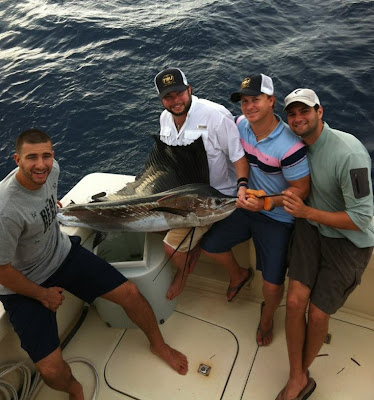 As we headed offshore we stowed the kite gear and brought out the big guns. But mere minutes of getting on our way, a large patch of weed showed face, and satisfied our guests with some rod bending peanut dolphin. One of the guys even managed to catch two on one hook. Losing light fast, we sped on our way again to the humps east of Governement cut. After judging the drift (3 knots of current and 15 knots of southwest wind) we set our spread. Two 30 wides were set off our bow at 50' and 100' with squid. Off our stern were 4 50 wides at 150', 225' and 300', with the fourth rod being our tip rod set at varying depths throughout the night. our 150' bait was a bullet bonita, with all other rods baited with squid. After a few hours, and 2 uneventful drifts, we refreshed our baits and reset. At the beginning of the third drift our shallowest 30w lost its weight giving us a false alarm. But as Feder reset that bait Nick baited and hooked up to something on our 300' rod. Some heavy runs and a deep bend in the rod had everyone excited, but when the fish was leadered it turned up as a large 7ft dusky shark. Although it was a big fish and put up a great fight, it wasn't the sword we were looking for. All we could do was reset and restart the drift.

Drift 4 turned up a couple of flyers boatside. On our fifth and final reset, a large bull dolphin came by to checkout the boat but he left sight before we oculd get a bait in front of him. 20 minutes later he came around again, and this time we were ready. But after the fish ate the bait and our angler came tight, the fish spit the hook. Thankfully the bull dolphin came back a third time and Captain John pitched the fish a small pilchard. After giving him ample time to swallow, the fight began. Considering we had already passed over the humps, and were very far from our target area, we pulled the baits and focused on this fish. Ten minutes of tug of war brought the bull boatside where Captain John planted the gaff in him. The fish dipped the scale down to 30lbs, not a bad fish! 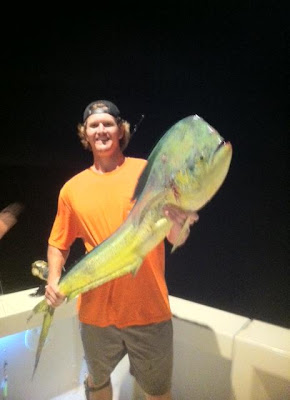 After gaffing that fish at 1:30 in the morning, we decided to call it a night. Dolphin fishing at night wasn't on the agenda but our guests didn't complain! We got back in safe and sound, and our group was more than happy about their catch although the swordfish evaded us. Final tally for the trip- 30lb bull dolphin, a football blackfin, a sailfish, a 150+lb dusky shark, released 3 peanut dolphin, and caught a bonehead.