We headed out with the intention of dropping for swordfish and catching some dolphin while out there (dolphin off Miami Beach are always a possibility). We made quick work of bait near bug and began the long trek out to the sword grounds. Upon arrival the conditions looked nice with a light east wind and manageable 3 knots of current. After a couple drops and no action we were distracted by some mats of weed sliding toward us. We hooked into a decent dolphin on a livie we had off the rigger opposite from the sword rod. We began retrieving the sword bait and kept an eye on the weed. After getting the sword bait up we went into dolphin mode. Its pretty common to find pelagics while out swording. Today we were lucky enough to run into schools of dolphin off Miami Beach near the sword grounds. We ended up catching about a dozen fish to 8 pounds and refocused on swordfishing. Unfortunately some pretty severe storms started sliding toward us and we called it a day earlier than planned. We didn't get to really put the time in for a sword but we had no shortage of meat. 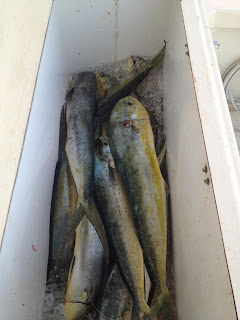