Springtime is our favorite time of year to catch a variety of trophy fish in Miami. Miami's offshore fishing in march really heats up, and every day is different. Sometimes the tuna are voracious, while at other times we almost can't get away from the dolphin and sailfish. Kingfish, wahoo, and a number of other species are just as likely to eat your baits, one of the main reasons why we love Miami's offshore fishing in march; there's no telling what's on the other end of the line. 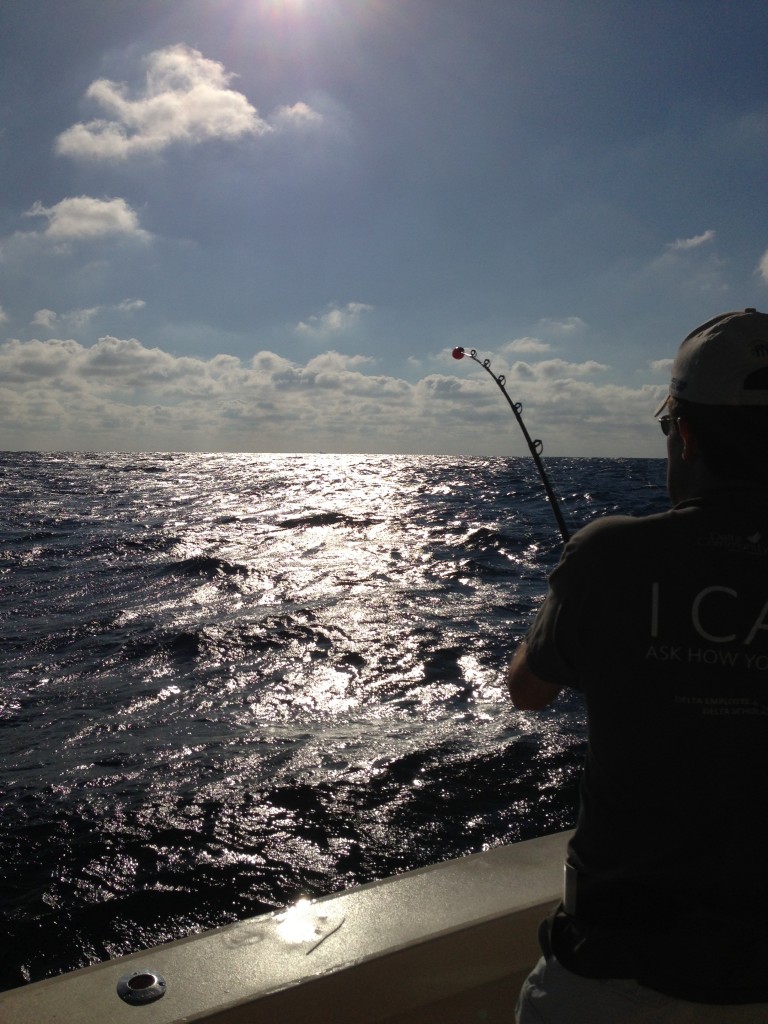 Today we had the opportunity to fish an afternoon half day. With hundreds of baits penned up we spent little time looking for the schools of pilchards that have been moving through the area. Nick marked some bait off bug light, and Brent threw the net twice filling up the remaining space in the livewell with chummer sized pilchards. Conditions looked great right out front, and for the entire afternoon we experienced a lot of action. The bonita's were chewing in full force, and we had our hands full with constant hookups. As soon as Brent could deploy one side, every bait was destroyed by a fat hungry bonita. They were even harassing our bottom rod. Thankfully though, a couple other species managed to out compete the boneheads every so often. Early on in the afternoon a fat red grouper inhaled a pilchard fished right on the bottom. We also raised a sail that ate the only bait fished with wire. Unfortunately it threw the hook right after it stopped jumping next to the boat. Later in the afternoon though we were able to get through the bonita to hookup on a double of sailfish that were happy to engulf the pilchards fished on our kite rigs. We fished until twilight hoping we could box an early season blackfin, but our efforts were rewarded with more bonita. After using up the last of our baits we called it a day. 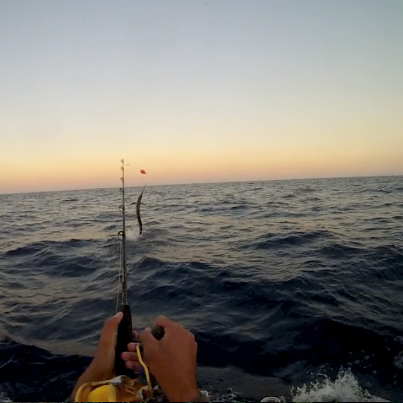 Final Tally- 2 Sailfish, 16 bonita, a cero mackerel, and a 4lb red grouper (which we released)

Today we had a full day charter that experienced non stop action the entire day. Just after topping off our livewells with hundreds of pilchards, we focused on the edge just south of fowey light. As soon as the first 3 kite baits were deployed we had a school of dolphin move through. We boated 3 before a fat blackfin tuna came right into the prop wash to eat a flatline bait. After we boated the tuna, a hungry sailfish came through our spread and inhaled a pilchard. At the same time another school of dolphin came into the spread and wrecked the remainder of the baits being fished. After boxing the dolphin and getting a picture of the sailfish, we reset our spread. For the rest of the day our group enjoyed bending rods on kingfish, bonita, and a remora before we finally called it a day and headed in. 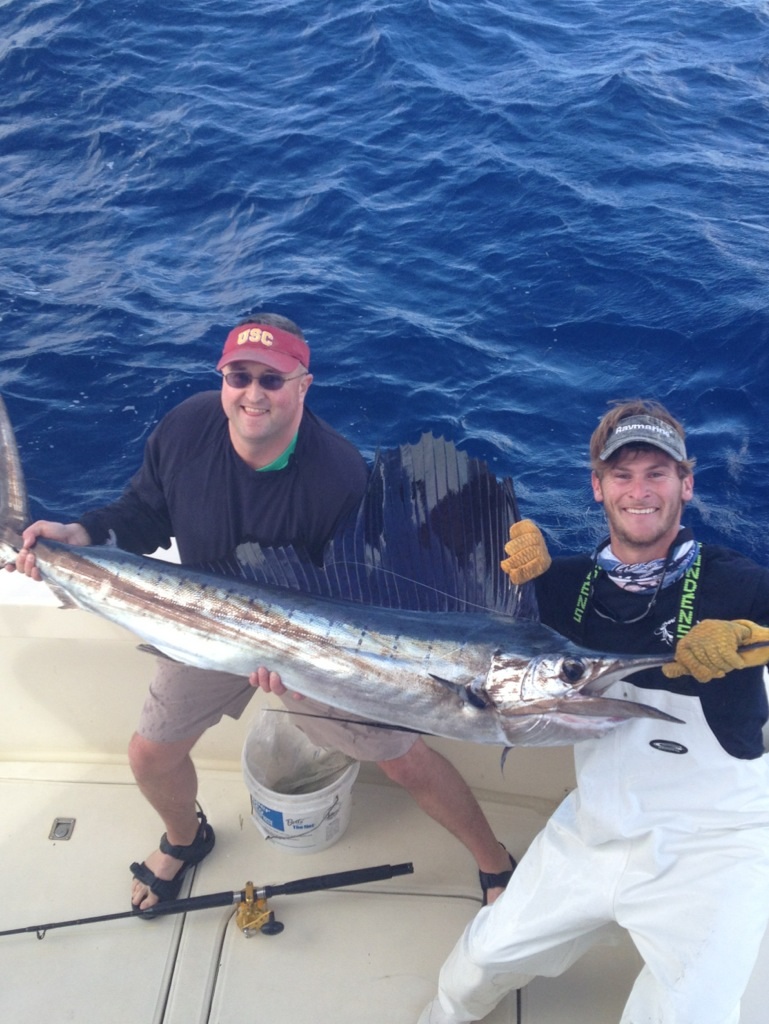 Final Tally- 1 Sailfish, 6 dolphin to 7lbs, a 10lb blackfin tuna, a kingfish, 4 bonita, and a remora

Our group today only wanted to fish for a few hours, but assured us they wanted some meat to take home. We pulled a few dozen baits from our pens and headed offshore. The dolphin had been pretty consistent on the edge so we rigged up a bunch of spinners in case we found a school. Shortly after popping the kites up we found them in 170'. We boated 2 in short order, but then the school got lock jaw. We found two more hungry gaffers after this school moved on, and our group decided they wanted to call it a day and enjoy their bag of meat later. 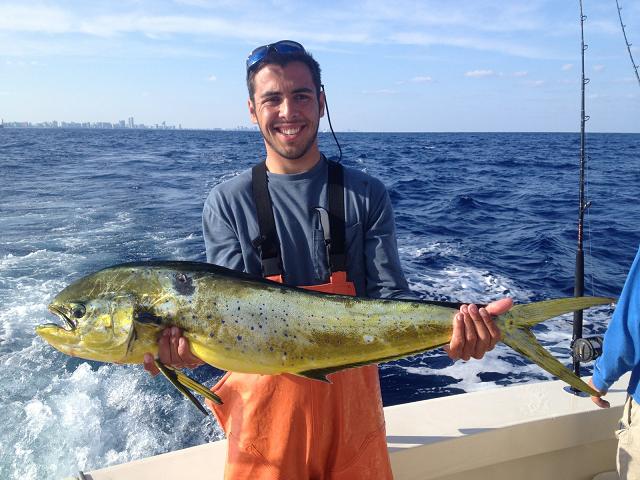 Final Tally- 4 dolphin to 8lbs and a cero mackerel

The variable winds today made kitefishing a nightmare of an affair. Winds ranged from 5 knot breezes to 20 knot gusts, making conditions very difficult to fish. A slight rip in 190' peaked our interests, and after boating a football blackfin tuna we had enough of the kite scene. We pulled the livebaits and put out a trolling spread looking for dolphin. It didnt take long before the short bait got whacked, but the hook didn't stick. We circled the area and had a second strike on the same lure only minutes later. After a short fight Alex brought a healthy 12lb dolphin to the boat. We picked at the dolphin for the remainder of the afternoon, finding bird flocks and excited frigates that pointed the way to the dolphin. All fish were caught on artificial lures, and oddly enough we couldn't buy a bite on live baits when we stopped underneath the birds. 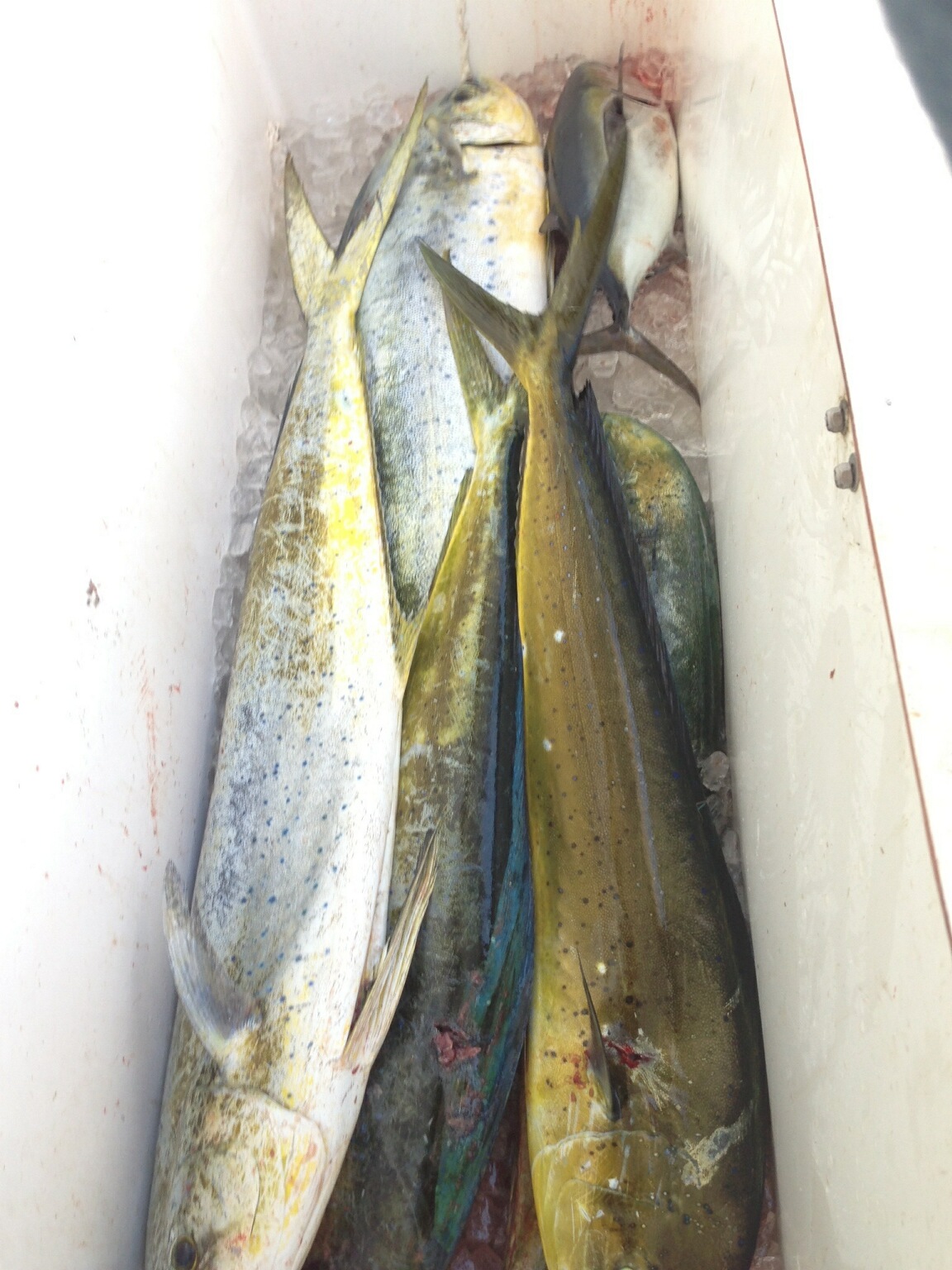 Today's afternoon trip proved the importance of covering the water column while fishing theedge of the gulfstream. For the entire afternoon the kite baits didn't produce a strike, while the bottom and middle-baits didn't last more than a few minutes. The Kingfish were leader shy because the water was so clear, but we did manage to fool a few with short wire traces over the wrecks out front of Miami

This time of year happens to be great if you're looking to connect with snook or big tarpon. Spring tarpon are gorging themselves on shrimp, crabs, and finfish during the outgoing tides in many channels and passes along the coast. Freelining an assortment of different baits is a surefire way to connect with a large silver king at this time of year (either in the pass or along the beaches outside of the pass). Snook fishing too has been consistent, just make sure to fish your baits on or near the bottom. Captain John had a short but succesful night tonight, boating 5 snook and 2 tarpon in a few hours. He was using live pinfish and jigs for bait. 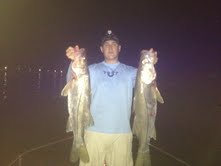 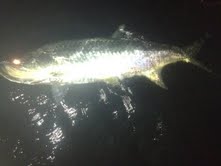 A strong Northwest wind brought the gulfstream current close to the edge, making for great conditions to fish. The water in the morning was filled with sargassum weed, but the tide cleaned the area up before 9. Clean water, good current, and consistent wind made for great conditions to kitefish, and today the fish were definitely biting. Our first pod of sails came through shortly after 9, and we had our hands full with a triple header in the cockpit. 1 fish pulled off, but we chased down the other two and got the releases we needed. After resetting south, another sailfish quickly found our right mid bait, making for another quick sailfish catch and release. This process repeated itself throughout the day with 2 more single releases before the bite finally slowed down. Mixed in with the sailfish were kingfish, bonita, and dolphin, keeping the rods bent all day. During the last hour in the afternoon, we also had a 6ft hammerhead shark swimming amonst the spread. We pitched a dead bait at it, and it quickly engulfed the pilchard and headed for the bottom. Our angler experienced a grueling fight for 15 minutes before the hook pulled, but our guest was surprised at the power the hammerhead had. All in all, it was a great day to fish offshore of Miami. 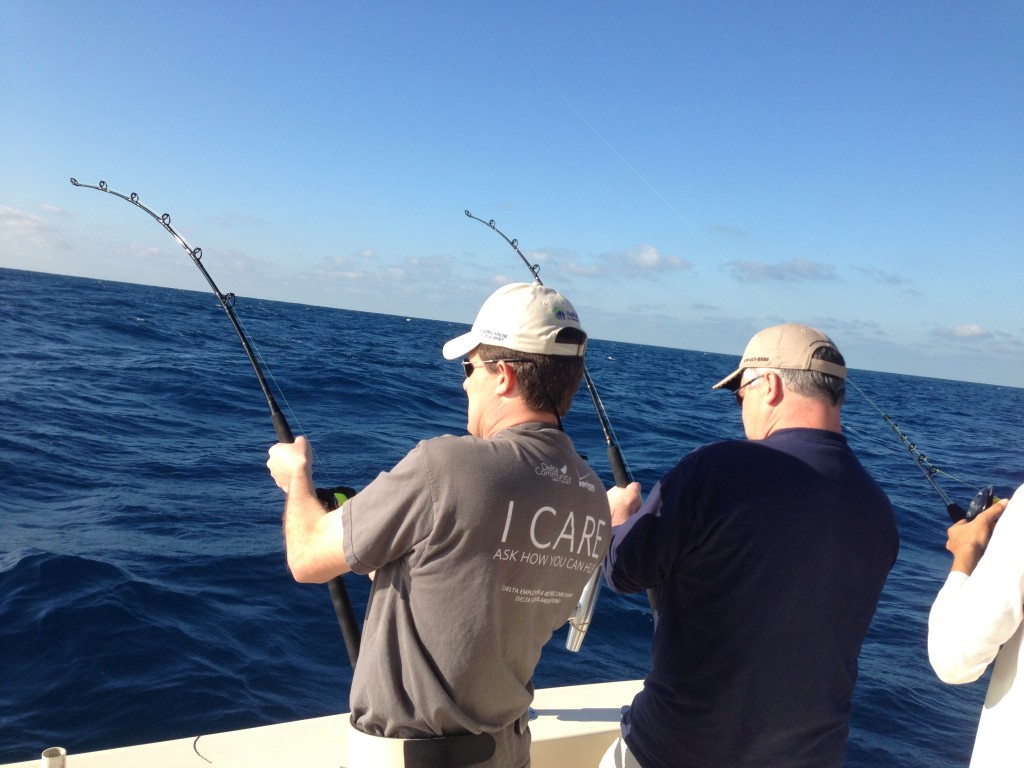 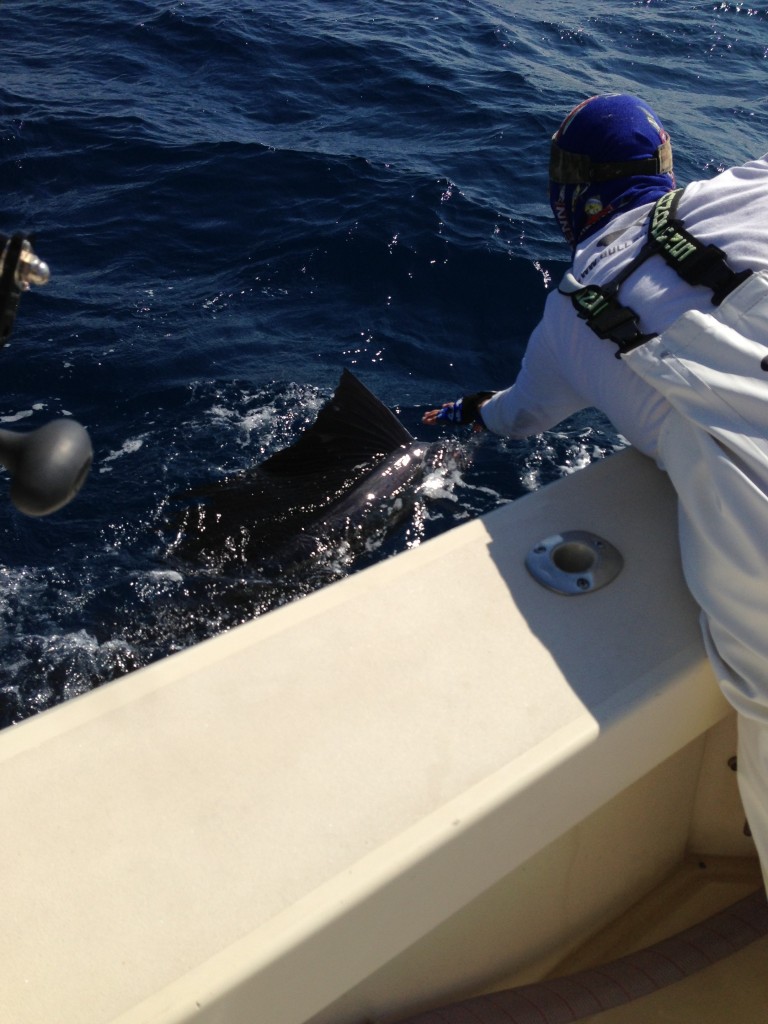 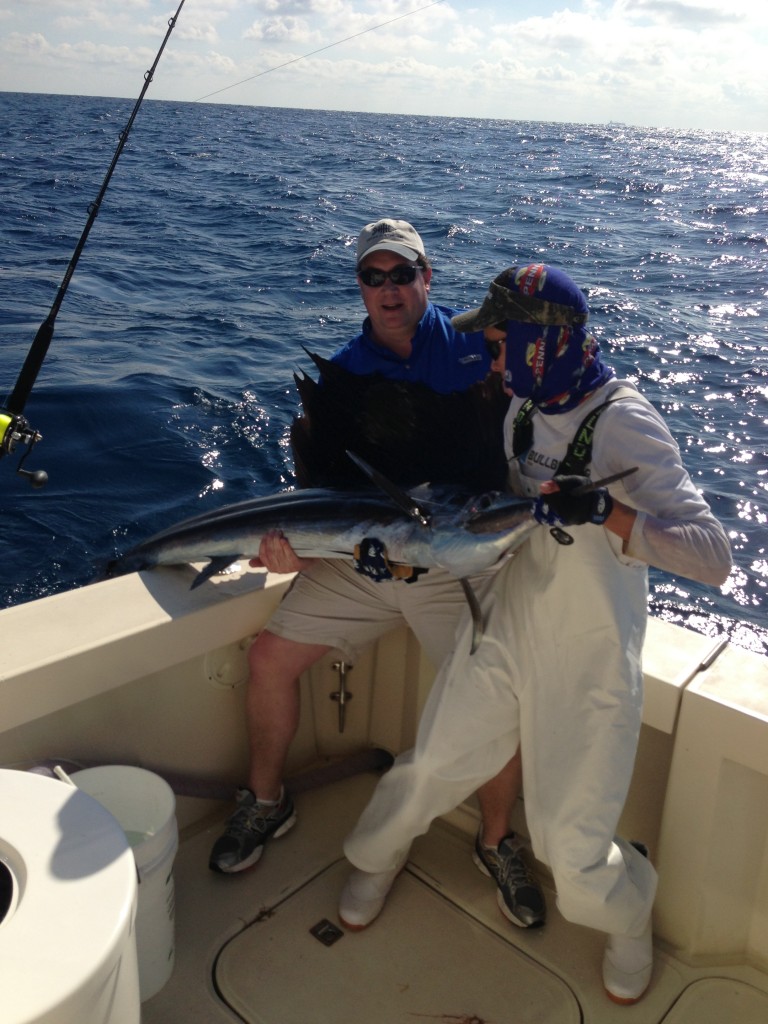 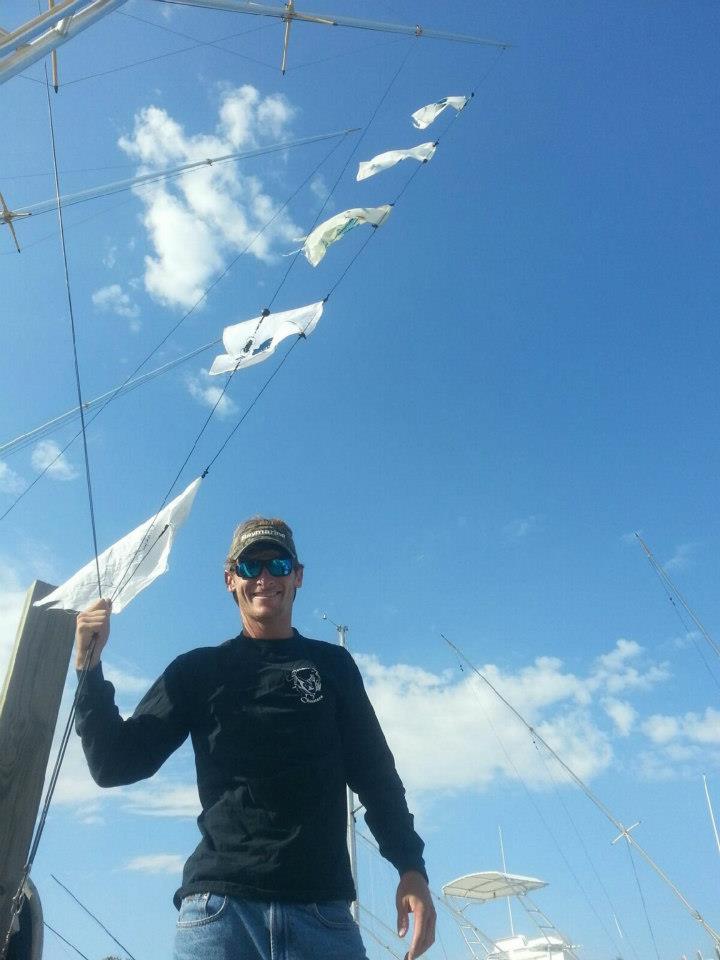 Final Tally- 5 Sailfish, 2 dolphin to 10lbs, 2 kingfish to 15lbs, a gigantic triggerfish, and a short fight with a hammerhead shark

Conditions from the day before didn't hold through until today, and Captain Nick had dirty water and little current to contend with. A bonita quickly engulfed a kite bite just as Nick found a bit of current. Not long after, two sailfish raided the spread and engulfed the baits. Both hookups were epic as the angler's got to see the strikes on the surface (one of the more entertaining benefits of kite fishing). Both angler's had never caught a sailfish before so this was a rewarding experience for them. After a little more than ten minutes we got the leader touches and snapped a few pictures. The bite dwindled after that, and we headed in not too long afterwards. 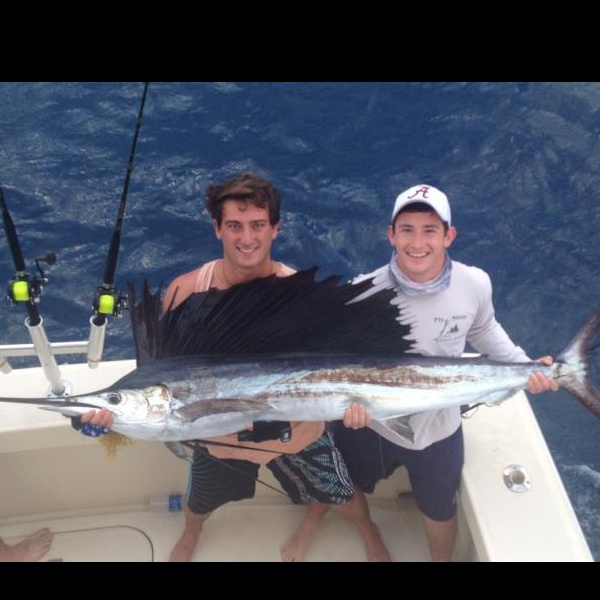