Left the dock at 7:30 and headed to the cut for bait. We netted pilchards on the flats then caught a few threads and headed out. There wasn't enough wind to fly the kites and the conditions looked terrible on the edge (helium on the kites was the back up plan). Further south it was better but the decision was made not to run due to time constraints. We bump trolled livies while we looked for current and decided to do a bit of trolling instead. We put out a spread of swimming ballyhoo and feathers then began trolling east until we found current. There was blue water outside of 350' so we headed south and zigzagged the contour from 350'-600'. We heard reports lately that the wahoo fishing in Miami had picked up, so we decided to pull natural baits instead of our typical artificial spread (wahoo are much more likely to eat ballyhoo and mullet at slower trolling speeds). The first hit was a solid strike on the shotgunned swimming ballyhoo in about 600'. The fish had a solid first run and I could feel the tail beat-- clear indicators of our target species. The fish then came straight at the boat before taking off again and the species was pretty much confirmed at that point. After about a 20 minute fight, we saw stripes and boated the wahoo. 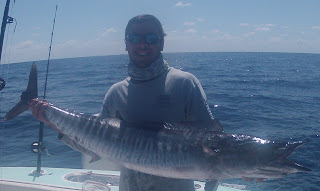 The fish ended up weighing 38 lbs. We continued trolling and eventually had a double header in 450'. One fish hit a pink feather and the other hit the shotgunned swimmer again. Both of the fish fought like tuna, but we weren't sure if they were skipjack or blackfin (blackfin being preferred). Fortunately, they were both tasty blackfin. 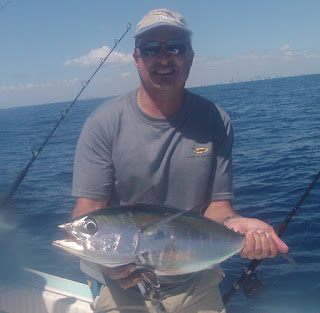 We came back to the edge after a few more minutes of trolling. We put out livies at every level of the water column then started live chumming. After emptying the well without a hit, we headed in. We were back by 1:00.