Tournament Fishing Aboard the Blue Yonder

Well the day started with a full bait well, overcast skies, and zero wind. Our plan to kite fish the edge for meat fish for the tourney proved to be a failure. A win required the 3 biggest dolphin, and the calcutta win meant the largest kingfish, dolphin, wahoo or tuna. Since the tuna have been so thick lately (and pretty large), thats what we targetted. Lines were in at 630, but with no breeze, Feder worked like a dog to keep even 2 kite baits in the air (3 would sink the kite line). While he worked that angle out the rest of us set up an assortment of flatlines up and down the length of the Blue Yonder. For maximum coverage, we had two baits fished off the bow, 5 from the stern, and 2 kite baits. We found a heavy rip in 160 just off fowey, but started our drift shallower in 110 due to the tuna's prevalence in shallower water. We had barely begun our wait when our rookie angler Spencer came tight to a solid Kingfish. The 10lber fought well before he was laid to rest in the fish box, wiping the skunk off the boat only 10 minutes into our day. Countless cutoffs plagued the spread, but we were intent on getting our tuna, so we stuck it out with our 30lb fluorocarbon traces. A few more kings came and went (went through our first pack of owner circles an hour in) before Steve came tight to a fish that meant business. A hard run and tail pumps could only mean 1 thing-----tuna. Well as Steve began to move towards the cockpit from the bow, the fish made a mad dash under the boat towards the running gear, and out to the otherside. Somebody went swimming for a brief moment to clear the running gear. Nick handled the end game honors and gaffed the fat blackfin. 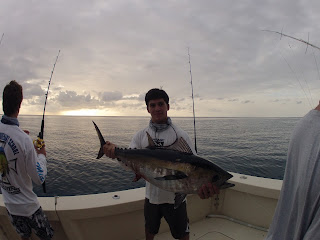 After icing our price, we reset back in 135 where we continued getting mauled by kings. Not too long after we reset, Ralphies rod went off, and steamed for the horizon. A sail did its dance around the boat. A solid 15 minute fight brought the fish boatside and marked our first sail release of the day. We were happy about the species diversity at this point in our morning, but there are no points awarded for Sailfish in todays tournament, so we hoped no more would disrupt our baits. A lull in the action had us ancy, so we steamed south of Fowey and reset in 120. John had just got two flatline baits out when both went off like clockwork. One angry greedy sail bumrushed our spread and ate two baits in a hurry. Eric and Ralphie put the heat on this fish, and after a 10 minute battle the 45lb sail was tagged, photo'd and released (eric's first sailfish). 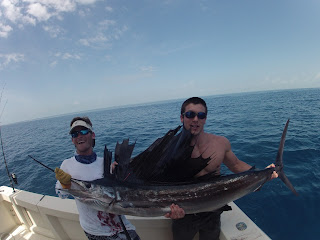 We headed back south and a monster bonehead inhaled Eric's bait soon after. We all were thinking tuna again, until the 20lb boney came from underneath the boat and upset us all with its presence. Not too long after, a feisty sail rose to a handful of live chum, and Feder tossed a bait to the sail who showed little interest in the livey. The fish danced around it for a bit before it returned to the depths. A dozen cutoffs later (45 minutes or so), something blasted a long flat pilchard. After coming tight another Sail tailwalked South. Spencer was more than happy when he came tight to his first sail, and got the full experience when he had to fight the 35lber from a dead boat. That fish came up hot, and gave a nice aerial display boatside after we tagged and released it. 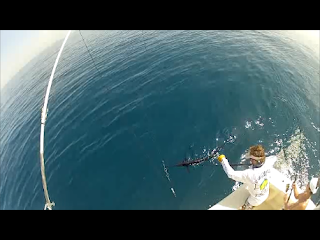 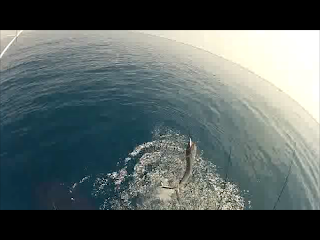 At this point in the day we were 3/3 on sails, boxed a solid blackfin and king, got a few bonies, and lost count at how many cutoffs we had. Thats when the wahoo showed face. Nick screamed from the Bridge as a 25lb wahoo came into our slick in 145. John pitched a livie to the fish, who inhaled it and left on a long run. Feder came tight to a second fish for the double when, during both fishes first runs, both hooks pulled. Terrible luck but what can you do. Weed and dirty water plagued us, so after boating a snake king we made the call to head back north. A bit of a breeze picked up after 1 so we popped the kites up with helium opposite fowy in 100'. We were hoping for a smoker king when another sail came up on the left long. Steve dropped perfectly, and handed the rod to Eric to fight his 2nd sail. Eric brought the lit up fish boatside in short order. A quick tag and release had us 4/4 on sails, but still lacking in the meat department. 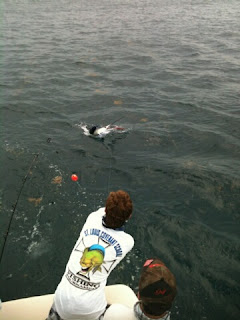 A large Hammer came up and checked out the spread, but only sniffed the baits. A cero mac made short work of the left long, and after boating him our baits were decimated one by one by weed and small kings. Needing to be at the weighin by 345, we headed in at 3. We navigated the Blue Yonder to the Weigh station in Stiltsville, docked, and got our fish off the ice. 21 Boats had entered the Calcutta, and we were number 16 to weigh a fish. Our Blackfin hung the scale to 22lbs, 10 ounces, and stuck it out against the remainder of the competition for the win. 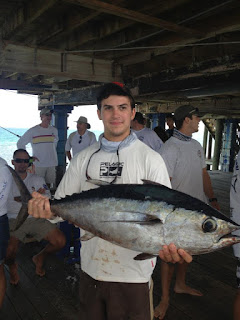 The day finished with food, friends, and prizes, and after the long day we settled back into our slip just before dark. Tally for the day-- 4/4 on Sails, a 23 lb calcutta winning tuna, 2 kings, a cero, 3 big bonies, and a ton of cutoffs.