To start, Dolphin are the perfect targets for offshore sportfishing charters in Miami. The eat virtually anything, love to jump and take ridiculous runs, fight hard, make great table fare, and are a blast on light tackle. The day started off bright and early at 630 am. Clear skies and light west winds made for calm conditions. We headed offshore on a clients 35 contender in search of dolphin. Reports of larger fish were promising as we headed out. We stocked the baitwell and armed an array of spinners for casting baits under birds or weedlines, and trolling gear with artificials to cover fishy areas. We planned to cruise along at a fast pace to cover water. We made he trek past 400' and hadn't seen any signs of life. Same for 600' and 800'. At 900' we saw a few loose weedlines but no bird or bait activity. Finally at 1100' we began to see larger pods of fliers. We trekked back and forth between 1200' and 2000' when we finally saw a few birds working a weedline in 2300'. Another boat was in the area, and soon after we arrived the birds began to frenzy. Gaffer dolphin chased flyers around the boat as we baited our hooks. We missed the first bite, but quickly made up for it with a triple header. We managed to boat all three fish (and fish a fourth line) with only 2 people aboard. We drifted for another 10 minutes after the birds moved on and picked up another gaffer sized fish. We managed 4 nice fish before 9 am. 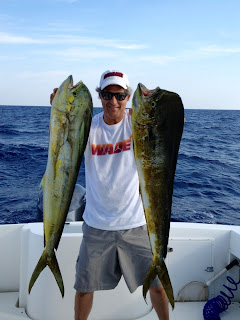 We moved on SE and found another weedline with no bait activity. We headed back west (with a clocking NW wind) and found a bird working scattered weed in 1200'. Soon after setting two pilchards out behind the boat, a slammer bull demolished the bait closest to the boat. A 45 minute battle ensued, but the bull finally succumbed to the 20lb spinning gear after many deep dives and surface acrobatics. 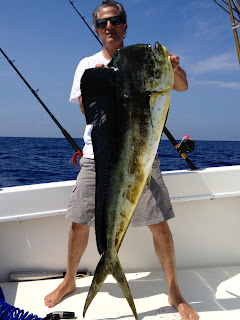 We pushed along that depth for a bit, following a weedline to some floating debris. A small tripletail and a lot of bait were present, but no dolphin. We stopped off on a few more weedlines and saw some busting skippies, and that was it for the day. We headed in and were back at the dock by 1. 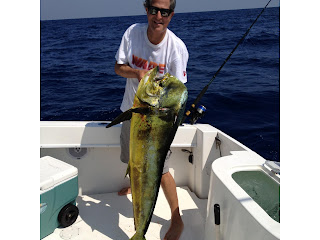