Snapper fishing in Miami has been exceptional lately. We got out for a night time snapper fishing excursion Saturday, with some time thrown in with the kites. We left the dock at 4:30pm with 3 dozen penned up baits in the well. A 15 knot east wind kicked the ocean up nice, so we couldnt help but grab another few dozen pilchards and hang them off the kites. Pilchards are still thick E-ESE off the mark about a 1/4 mile out. We got a few in the nets, but we got full strings of sabikis so theyre still there. We arrived south past fowey at about 545, and got the first baits in the water not long after that. Great water color and current in 145, and it didnt take long before the first bite. First fish was a solid bonita that we boxed for bait. After resetting that mid, another two lines went off. One was a fat bonehead, and the other a football blackfin. We headed further south and trolled along the way, pulling two more boneheads into the boat. We reset again, this time closer to triumph. All six lines and a speed jig were out by 700pm, and this would be our last drift before anchoring up. Well something clipped off the mid bait, and then we got a hit on the right short. Another bonehead. We got the lines in and headed to the reefline. First spot was on some great bottom in 50'. Great bottom, chum was ready (we had 9 blocks and 50lbs of oats ready for duty), but no current. Chum was going straight to the bottom. No go here.... We pulled anchor and headed out a bit. Setup in 90', and had great current and great bottom, and right off the bat one of our bottom rods went off with a nice fish. Couple minutes later brought up a slob mangrove. 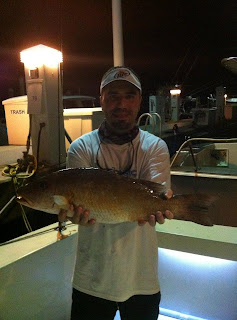 But after 1 more 4lb mango, there wasnt any action for 45 minutes. So we pulled anchor again and headed to another number. Snapper fishing in Miami requires the right amount of current. Too much and you cant get the chum down to the fish, but if there's too little then the bite won't turn on. This time we got it right. 55', good current, great bottom, and lots of fish. With two bottom rods set and 2 flatlines going, we had the group hooked up for the remainder of the night. These were large and aggressive snapper, with the average fish weighing 2-3lbs. We bailed 4lbers on the bottom rods, and had a few flag yellowtail and a lot of beast mangroves making it to the box. After 4 bucketfulls of chum, they finally slowed down and the guys wanted to call it. We made the long run back and had the guys leave with full coolers of fresh snapper. 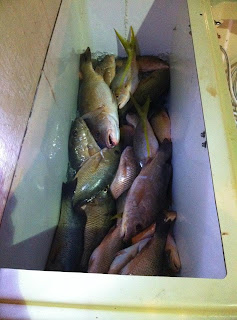