It was a gorgeous morning to spend the day Sailfishing in Miami. We left the dock at 7:30 with Johnny, Blake, and Steve on board. Winds were blowing about 15 knots out of the north and it was a cool April morning. If north current was present on the edge the late cold front would hopefully get the sails chewing. We headed to bug to catch bait. The pilchards were about an eighth of a mile south of the mark and were moving very fast. We had to move around at 6 knots until we painted them on the sounder and drop sabikis on the bait ball. As soon as you got a few strings, the bait moved and we got to chase them again. After about an hour of bait fishing, we ran to about 130' just south of Fowey. The current was moving north at 2.5 knots and the water color was good, although there wasn't a defined edge.We put the kites up and it didn't take long... 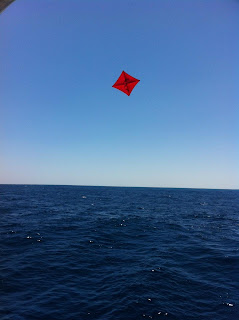 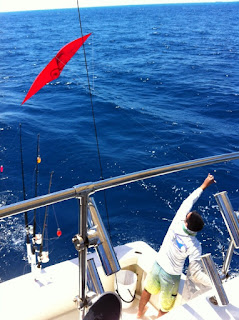 While i was setting the 6th bait, we had a triple of sails destroy the spread. One of them greyhounded toward the boat and never found the hook. The other two were hooked well and the fight began. Blake's came in first and was quickly released. Attention turned to Johnny's fish who was a little more stubborn. After running him down, we boated the fish for a picture. 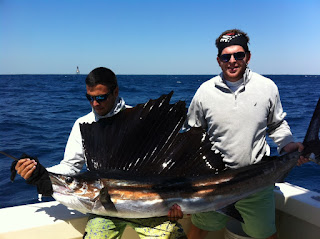 By this point, we were out in 190' and we pulled the spread, moved south, and reset. We popped up the kites again and had a bit longer lull. A little bit south of the can, we had a single which we made quick work of. With greener water pushing out in front of Key Biscayne we moved back south again. We had caught 3 sails by this point.

After resetting off Fowey again, we began the waiting game. We missed a sail which destroyed the right short and almost jumped in the boat. We also had another sail investigate the spread and decide he was too good for pilchards. Later in the drift we hooked into another fish which we released after a few minutes. 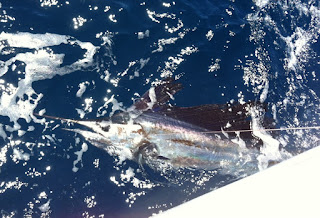 After the 4th sail of the day, the wind died. We only had about 30 more minutes to fish so we started bumping livies out of the riggers instead of putting the kites up with helium which produced a window shopping sail who decided against adding to our tally. We called it a day after a few more minutes. The crew was more than satisfied... Johnny and Blake caught their first sails which was our goal...

Final Tally- 4/6 on sailfish, and remora