We left the dock at 7 and headed to Bug. Pilchards were thick on the mark and we loaded up pretty quick with a few cigar minnows as well. Conditions have been a bit better south so we made it to the edge and began trolling south. We put out a spread of swimming ballyhoo and feathers and started to make way. The wind was blowing about 15 knots out of the ENE and there was a decent water color out front that improved as we headed south. Conditions looked perfect for kitefishing, and we were exctied to start releasing sailfish in Miami. About 45 minutes after deploying the spread, we had a double header of dolphin in about 350 feet. One fish measured 19 inches to the fork and was thrown back and the other was about a 10 lb bull. 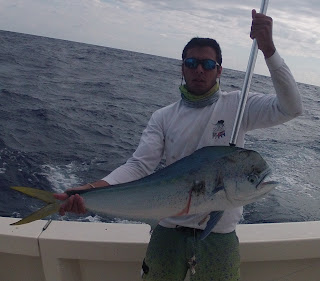 The current was pushed in shallower down south and the conditions looked excellent for kite fishing. The current was ripping to the north at 3 knots and there was dark blue water pushed onto the reef. We continued to troll a bit further and had another double header of dolphin. The were only 5-8 pound fish but decent table-fare nonetheless.

We popped up 2 kites in about 150 off Boca Chita and began the waiting game. It didn't take long before a sail crushed the right long and started grey-hounding. Unfortunately, the line was packed on the spool a bit loose during bait adjusting and it dug into itself, then broke at the spool. Before we could even comment, there was a solid boil on the right short and we were hooked up. It ended up being about an 8 lb blackfin tuna. 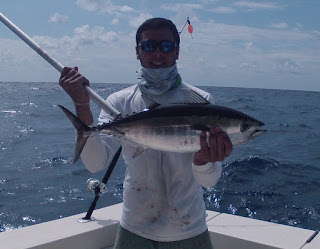 Before we could reset the baits and soon had another sail crush the right mid. This fish wanted to go to Bimini so we ended up pulling the spread and chasing the fish with the intention of resetting just south of where we started. Unfortunately, the hook pulled just out of range of the leader. We were now 0/2 on sails. We ran back south and popped up the kites again only to have another sail crush the right long and miss the hook. We were now 0/3 on sails. Before I could reset that side, the right short got slammed. After a couple minutes, up popped about a decent tuna. 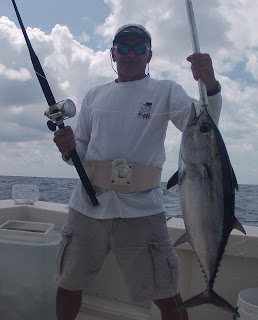 We were now 0/3 on sails, 4/4 on dolphin, and 2/2 on blackfin. We reset the right side and started waiting. After a bit of a lull we pulled the spread and ran back south. We setup in 180 and had a sail swim up to the right short. I was ready this time and dropped to him accordingly. We ended up getting this guy to the boat and getting a picture at the leader. 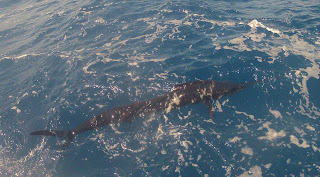 We reset that bait and after a couple minutes we had another sail on. We got this fish to the boat after a few minutes (he ended up being tail wrapped). We untangled the fish and revived him at boat-side. He swam off strong. 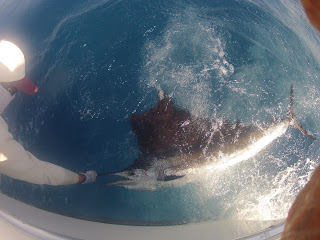 We reset the baits and during the next few hours the bite was hot. The fish were pouring through in 180 on a newly defined rip. We ended up catching 5 more in the form of 3 separate singles with a final double header. We only missed 1 more fish during this span which was a relief after the way the day started. In addition, we plucked one more blackfin and 3 bonito to round up the day.