Kite fishing is the name of the game on every one of our Miami sailfishing charters. By using kites, we are able to suspend 3 baits from one kite line, keeping frisky live baits struggling on the surface. 2 kites, 6 baits, and blue offshore waters make for serious sailfishing conditions, especially when you add wind and North current to the equation. Clear skies and an 18 knot ENE wind made it seem like midwinter in South Florida, not mid June. The weather was perfect for popping the kites up, so after spending some time loading the wells (pilchards were thick 1/4mile off bug) we headed out. Dirty water and sargasso were everywhere out front so we headed south. We finally found a rip in 190 with cleaner water a few miles south of fowey and popped the kites up. 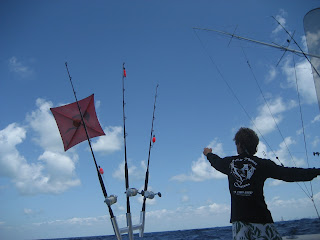 We had a cutoff right off the bat, then a pair of small dolphin came through. One munched the right mid and stole the bait then came to the right short where he found the hook. The other fish found the left mid kite bait and was hooked immediately. Nick and margaux both brought the dolphin in without any issues. After the double the sargasso began to clog our lines so we reset back south. Just after setting all six baits a tuna clobbered the small pilchard on the left short. After another short fight Nick swung the football into the boat.

We reset the short and not long after a Sail came up on the right long. After Brent fed him and hooked up, Alex came down from the bridge and settled in for the fight. The acrobatic sail took only a few minutes to bring to the leader, and we got the release in short order. 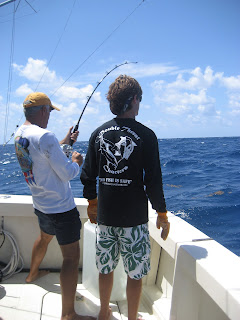 With that release we called it a day and headed back towards the marina.