Today's Miami Inshore Fishing Report is focused on tarpon and snook. Government Cut has been on fire lately during the night bite, with pinfish taking a very large share of slot snook and prehistoric tarpon. After checking the tides and seeing a window of opportunity for a hot bite, we headed out. We left the dock at about 11, giving the group just enough time to fill the well with our top secret baits. Among the snook and tarpon candy were pilchards and even a ladyfish. We couldnt wait to see what rose to eat that... We made it to the cut and setup our first drift. Fishing the Blue Yonder, we managed two flatlines off our bow rod holders, and three snook baits off the stern. Action was fast and furious tonight, as the tide slowed something crushed the ladyfish off the flatline. A large tarpon jumped and shook his head for a few minutes before he threw the hook. After we reset Grossman hooked up and successfully boated his first snook. 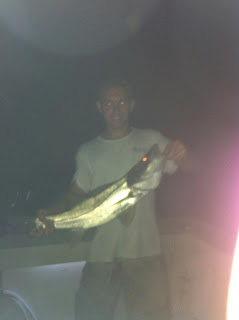 Eric was next to hook up on light tackle. After a tug of war he boated his first snook. Just as we released his fish a bow line went off. Eric released his snook and ran up to fight his first ever tarpon. After a 10 minute fight we got the leader touch and release on a nice 30lber. The tide began to pick up and everyone was pumped. From then on it was fast action with snook eating baits and tarpon taking flat lines. 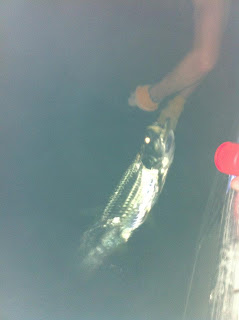 Eric hooked up again on extra light tackle, and this time it was a beast. With the drag buttoned down, he pulled his second snook ever into the boat. We guessed her at 15 or 20lbs. A quick picture and revival had her on her way. 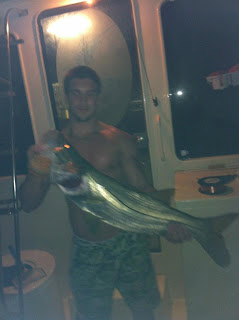 As the drift proceeded Wollman hooked up again, just as one of Feder's bow rods went off. A tarpon took to the air as wollman got his snook to the boat, and the Blue Yonder gave chase. Feder put the heat to this fish, and it took a solid 15 minutes to whip the fish and get it boatside. It was a nice 80lber, and we got the hook out and had her on her way in short order. We didn't get a picture of this fish, he broke the hook with too much pressure at the leader. 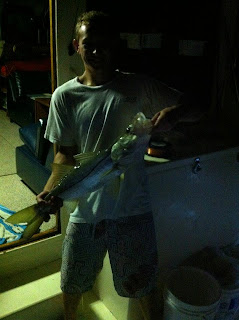 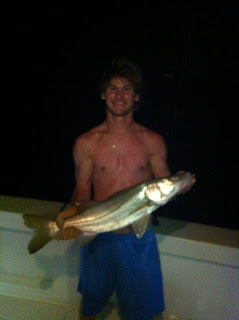 Grossman and Eric pulled a few more snook into the boat, and Feder got his first snook ever in the cut after getting manhandled by a few beasts. A bow flatline went off and Nick was obliged with another tarpon. He whipped the fish in a few minutes and after grabbing a few pictures, we called it a night. 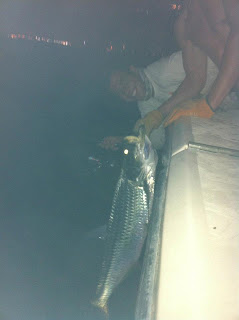