Miami Beach Fishing Charters literally occur right in front of the famed Nikki Beach and the adjacent venues that have made South Florida the cultured area that it is internationally known for. Government cut, the key shipping lane that brings both cruise ships and container ships to port holds a variety of gamefish that many anglers wouldn't even expect. Tarpon and snook are caught with regularity, with snapper, grouper, sharks, jacks, and many others will also intercept baits before either tarpon and snook can reach them. We headed out on the Blue Yonder with high hopes after a previously stellar night in North Biscayne Bay. Tonight's tide would be less favorable but more convenient as it was an evening trip. We loaded up on special baits and hit our spot. Things started off a tad slow as the sun lowered behind downtown. Our first fish was a nice jack crevalle. Shortly after, a small tarpon jumped out of the water after a live bait but didn't even come close to finding the hook. We hooked into one more fish before sunset. This one fought in a stubborn manner and sounded into the current. We got him up and stuck a 10lb mutton with the gaff. 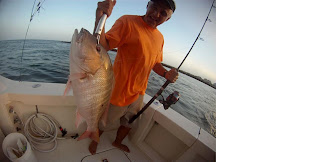 After the sun set we started picking at the snook. We started with a nice one which was caught on the bow. After a bit longer we caught a second nice snook with similar bait presentation. Soon after we hooked into a big fish on the bow. The rod started screaming as the faint silhouette of a tarpon took to the air. Alex was on the rod and began to fight the silver king. After no shortage of acrobatics and blistering runs we got him boatside. The fish was between 80 and 100 pounds and was whooped within 20 minutes. After a few high fives we did one more short drift before calling it a night. Our efforts produced 1 more snook. Poor lighting merited all the pictures inadequate after sundown (couldn't get the flash to work)