A few inconveninces in the morning had us out a bit later than expected. But things took a turn for the better when we got our share of bait, and headed for the edge. In the Spring you can have your shots at landing light tackle Kingfish in Miami during a full day offshore trip. Kingfish are most at home in the middle of the water column. When the weather roughens up they are usually eager to eat kite baits and flatlines, but more often than not a well presented mid-depth bait will get bit 9 times out of ten. In spring, 40-50lbers are not uncommon, and today we even boated one without wire leader.

We cut the engines in 140 and began our dead drift with 6 kite lines and 5 flat baits with a jig working everywhere in between. Only minutes into the drift did the kings crash the party. First bait out was a gog on the cabo, which got wrecked by a smoker. 15 minutes later we boxed a 40lber. From here on in, the kingfish refused to leave our baits alone. We could barely deploy the livies before the the kings were up and slashing at them. 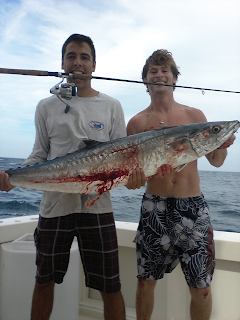 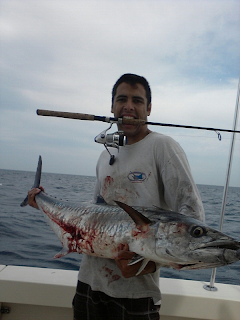 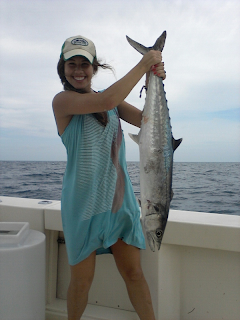 A couple kite baits got decimated and fish clipping baits in half, getting big air, and boiling like crazy. Margaux was next as something picked up another flatline bait. After a short battle we brought the 8lber to the boat.

With the kites producing strikes but no hookups, we put wire on to drop back to the aggressive kings. A bonehead was first to strike, then margaux got another king on the flat. We still were drifting the drop in 140 when nick noticed something toying with the bait on the cabo. Feder dropped back to it, and a feisty little sail broke the surface. 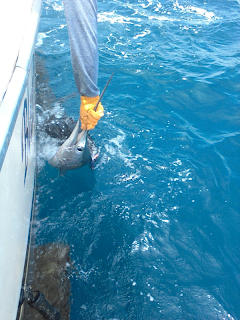 It gave nick a fun fight on the cabo, and after a short fight we got himboatside for a picture. After tagging and taking a few pictures it was quickly revived and released. 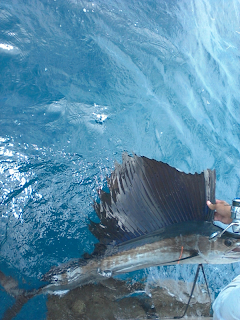 We caught another bonehead and had a few more kings miss baits before we burned through the last of our livies. We dropped anchor in 130 and put down some bottom rods and flats. A cuda immediately killed a flat, and cut us off. He was followed by another bonehead. After that though, only a few remoras and a 4ft moray eel came to the boat. We idled back and got in just before the storm came through. Final tally for the day-- 3 kings, a sail, 3 boneheads, a green moray, and some remoras