After spending the night before prepping our tackle for a day of practice fishing, we once again were going to be kite fishing with Bullbuster Monofilament. The first real cold front of the season moved through that night and the plan was to capitalize on what we hoped would be some excellent sailfish conditions in the morning. After everyone arrived at the boat and stashed away their personal items, we started up the engines, un-cleated the dock lines and headed out.

Bait was once again thick at bug light and we loaded up with big pilchards, threadfin herring, and a few hard tails. When the wind is blowing greater than about 15 knots, we prefer to put in the time necessary to catch larger baitfish. Even though sailfish may prefer a different sized bait on any given day, we like to hang larger baits on our furthest kite clips to grab the attention of a passing pack of fish. We had not heard of any kingfish around so we rigged with straight 50lb smoke blue bullbuster leaders, and 7/0 mustad circle hooks.

We then moved offshore and it didn't take long before we noticed a hard current edge. The edge is where the western wall of the Gulfstream Current collides with Miami's inshore waters. At this time of year action is definitely best when this current is along the reef line in depths ranging from 60'-250'. Today the edge was in 155' and the water was a rich blue with a lot of North current. We had only popped one of the two kites up when John saw a sail and some dolphin tailing down sea and told me to get ready. The sail exploded on the long and the other two baits went off with dolphin. (we hadn't been fishing 5 minutes and still only had one kite up) We boated the two dolphin as well as the sail. We reset and got two kites up. It didn't take long before we had a double. From then on it was pure chaos. We had doubles, triples, singles and some tailers swim through our spread. The ocean was alive. 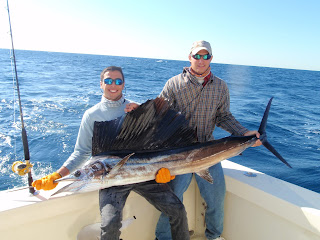 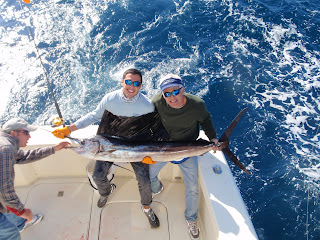 By 11 am, we had caught 8 sailfish out of 11 bites, and wanted to move offshore to try to catch other species. We saw some tuna chasing up flyers twenty minutes after we pulled our kite spread, and decided to troll for some blackfin. The fish were finicky, but our spread still produced two of these delicious fish. We also caught 2 skipjack and 2 bonito, which were released because the quality of their meat doesn't compare with that of dolphin and blackfin tuna. 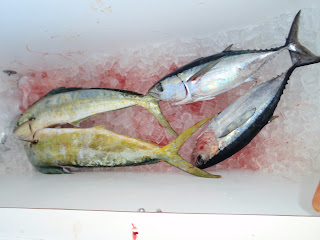 Once again we felt confident with Bullbuster's new line of monofilament. After the number of sailfish we caught on 20lb test today we are definitely excited to spool our other reels and have one less thing to worry about while fighting our fish. Final tally- 8/11 on sails, 2 dolphin, 2 blackfin, 2 bonito, 2 skipjack, and 1 small shark