Kite Fishing in the Rain

The morning started off clear with a 9 or 10 knot breeze, but of course that didn't last long. We braced ourselves for a day of kite fishing in the rain. After spending a few minutes searching, we found the pods of pilchards 1/2 mile east of bug and filled the well in short order.

We headed south and put the kites up on an edge in 150'. The light winds only allowed us to fish 4 baits. At about this time the first clouds came through and storms began to form offshore. After a half hour we had to pull the kites because of the rain. We moved offshore a ways and cut the engines in 375 to begin a beam-to drift in the flat ocean.

We had just set the bow flat and deep rod (among the 6 other baits in the cockpit) when the deep rod went off. A few minutes of fighting had an angry bonita boatside. Feder reset and redeployed the deep rod, which went off minutes after with another angry bonehead. Another bait was sent deep off the bow, and it didnt take long before something found it. Something toyed with the bait for a minute, then the line slackened. Feder reeled line like a mad man, and came tight to a sailfish who had just started his dance on the surface when the hook pulled.

After that fish came unglued, the wind picked up a bit. We tried again at the kites, hoping we could deploy them while drifting side-to. the kites refused to fly though, so we pulled out the helium balloons and popped 5 more baits up. heavy rains came through all through out the morning, and the seas picked up a bit. Action was slow after the missed sail, so we pulled the spread and moved shallower and a bit further south to power drift.

We reset the kite baits in a building sea, and put a chum bag out to entice the kings to eat. A cero mackerel obliged us by killing the left short, giving Garret a fun fight. After resetting the short bait, a good sized king drilled the long bait. Garret brought the fish to the boat a few minutes later, and was happy to take a picture with the 15lber. When kite fishing in the rain, its important to either put them up with helium (in a full on downpour), or rotate them out periodically to give them a chance to dry off. 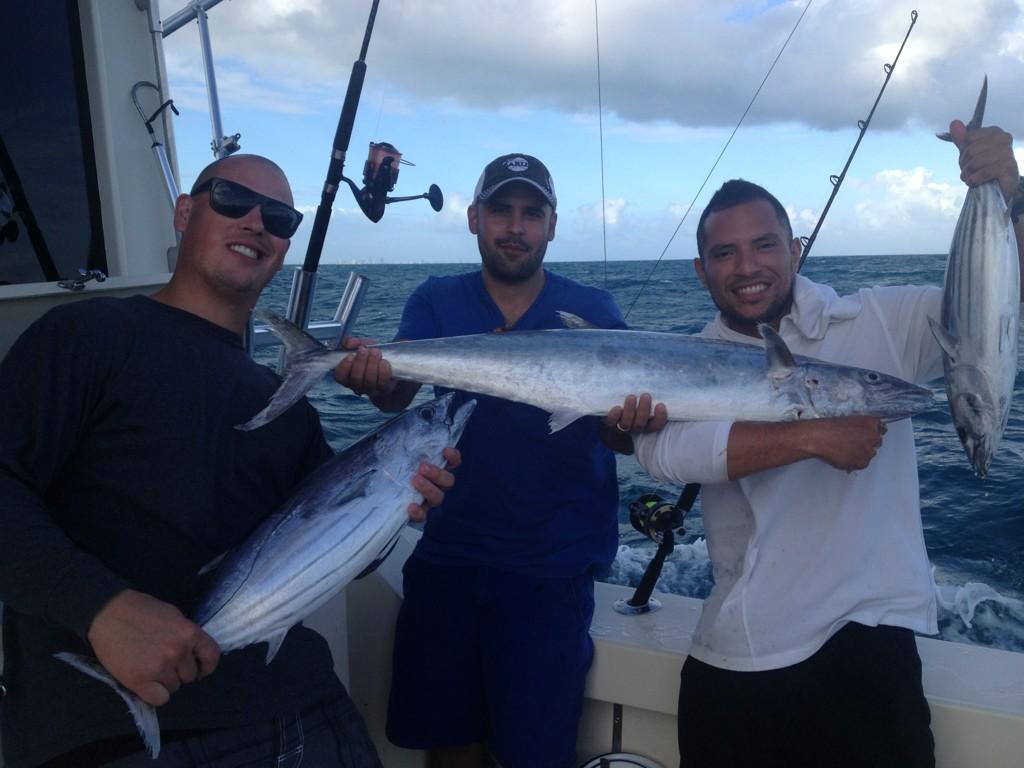 Just as we were about to reset the baits, another squal line came through. We stowed the kites and deployed a spread of livies to bump troll around the edge. An hour into that endeavor--in the pouring rain-- Nick spotted a Sail trailing our left long bait in 135'. Feder dropped back and came tight to that fish, when the left short popped as well. Jack and Garret fought the double for a bit when Garrets fish threw the hook. We cleared the lines and chased Jacks fish, which was lit up and giving everyone a wild boatside show. We got the clean release after some acroboatic jumps, and boated the fish for a few quick pictures before reviving her and letting her go. 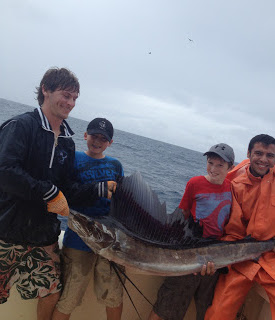 We redeployed the spread soon after, and came upon a few birds working a bucket in 150. A few dolphin came up and toyed with our baits, and the boys had a blast reeling in the grasshoppers. We boxed one but released the other. We moved on but that proved to be the last action of the day.