Today we had a 3/4 day offshore Charter that had been rescheduled a few weeks back. With a few baits left over in the well from the day before, we headed east in the dead calm conditions. We slowed the boat right outside Biscayne Channel to view a pod of porpoises, when John took a look at the sounder. We were painting bait from the bottom to ten feet up and thick! Looking down, we saw the hordes of pilchards, and not wanting to waste the opportunity, we loaded the well with more fresh baits. Little Leo and Gio had a blast winding in full strings for a few minutes before we continued offshore. We popped the kites up (with helium) in 140 and got 5 baits dangling straight east of Fowey. After giving Bruno (Father/birthday boy) a crash course in kite fishing, we got him fine tuning the spread in no time. While the ladies were on the Fly bridge talking with Captain John, Bruno was tending to the right trident, and the kids checking out the livewell, a slob of a tuna blasted the left long. Feder came tight to the fish and handed the rod to Bruno so he Nick could clear the lines. After the initial blistering run Bruno settled into fight. He worked the fish to the leader after a 20 minute give and take battle. After a couple minutes on the leader, Feder worked him close enough for Nick to place the gaff shot. Up over the gunnel came a slob 30+lb Blackfin. 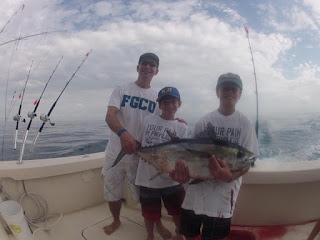 Now that the ladies' orders were filled (they wanted fresh sushi), we headed south to reset the spread. There was a long lull in the action after that initial strike, and a monster storm loomed East of us for a few hours while we watched the kite baits and lost a few fish while deep jigging. At about 11, when the pre-storm microbursts came through, the long kite bait moved out to sea. 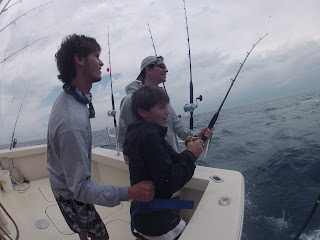 A Schoolie dolphin obliged Gio, the older of the two children aboard. The Family marvelled at the gorgeous colors, and Leo couldnt wait until his turn. 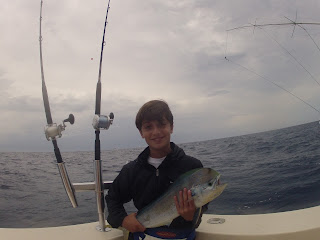 Well another lag in the action had us packing up even though leo was short a fish. 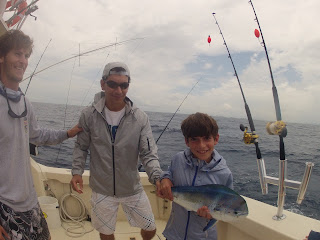 We headed in while trolling xraps, and knew that in only a few minutes Leo would be smiling. 2 minutes later, Leo's drag started singing as an angry cero mackerel distanced himself from the boat. After a five minute tussle, Leo had a smile from ear to ear as he looked up at the camera with his prize. 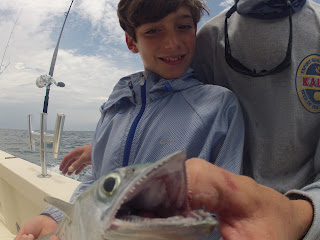 Slow day, but the weather held out and our group had a blast (and a ton of fresh tuna). Final tally-- 30+lb Tuna, Schoolie Dolphin, and a cero mac with a few cutoffs and tug of wars in between.