We left the dock at about 1:30 for an afternoon half day fishing charter. The trip started at about 1:30 with us looking for bait. Bait had been tough all day so we went to government cut and started looking around. Ended up getting about a dozen threadies at a range marker. Also got about 6 runners and 4 cigar minnows. We had enough bait for the 3 hours of sunlight and ran south. We set up about 1/2 mile south of the can in 100'. We knew the fish would be pushed in after a week of 25+ knot east winds. We popped up 2 kites with 6 baits. There was about 2 knots of north current and 2-4 foot seas. Wind was laying down and only blowing about 15 knots. We slowly started bumping out and hooked into a sail in about 120'. David Grossman was on the reel and after a few minutes he caught his first sail. Midway through the fight, another sail demolished a cigar minnow but missed the hook. 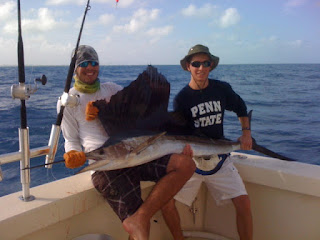 We ran right back south and reset about 1/2 mile further than before in 115'. We popped up both kites and it didn't take long before we hooked into a fatty. He grey hounded in circles right in the middle of our spread before sounding. He decided to swim as deep as he could after deciding the kite line was too high for him to jump over. This guy was extremely stubborn and we had to clear the lines and chase him to avoid getting spooled. We eventually got him to the boat after a long fight. He was revived and released after a few pictures. 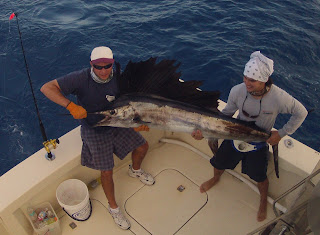 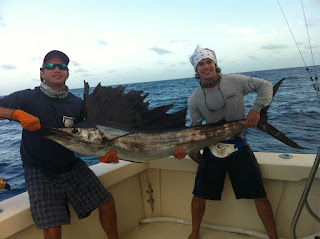 We ran to the same area and reset again. It was starting to get dark and we were pretty content with our results for only 2 hours of fishing. When we thought things couldn't get better, we got a solid strike on the right long. A lit up sail started greyhounding to the north. After trying to get a double to no avail, we decided to pull the lines and chase the fish. After an impressive aerial display just a few feet from the boat, we revived and released the fish. (no pic of this guy) We headed in after a beautiful afternoon on the water. As a disclaimer, we only pull special sails out of the water (someone's first sail or impressive in terms of size, etc.) It is always at the angler's request. Taking them out of the water is generally discouraged however because it can cause unnecessary stress to the fish. Today all the fish were revived only after a few minutes. Final tally- 3/4 on sails in a half day Miami fishing charter