Bait was slim pickings everywhere, but we managed. Bug held baby gogs (awesome baits for dolphin fishing), and there were some pods of pilchards off the mark, but they were getting crushed by bonita which made it hard for us to fill the well any further. Without wasting any time we headed out.

We made our way offshore, and after a few hours, came upon a large log loaded with triggerfish and baby tripletail. After working the area thoroughly for dolphin to no avail, we dropped jigs and live baits deep. For our efforts we got two 18" long weehoo. Without any more action, we moved on. In about 850' a bird was working its way over a few patches of weed. In this situation we prefer to use light tackle when dolphin fishing. In Miami, fish can grow to over 40lbs, and although the fight is always memorable, we prefer to take it one step further by using light and ultra light tackle. Deep sea fishing for dolphin is always a blast when using light tackle because the little guys fight well on ultra light rigs, while the big boys test your limits on the light tackle. After dropping 3 livebaits over the side, a trio of gaffer dolphin crushed the baits. One came in quietly, another dove deep, and wrapped itself in the props (Brent had to handline the 12lb fish the last 100feet in). The last fish was a hefty bull that decided to eat our light tackle special--- an antique penn spinner filled with 10 lb mono. It was our sabiki rod, that we decided to have some fun with, and it worked flawlessly. We finished the day on the edge, starting our drifts in 180 ft. We dumped the livewell in search of an early season sailfish, but we were obliged with a few boneheads and snake kingfish instead. After draining the livewell we called it a day. 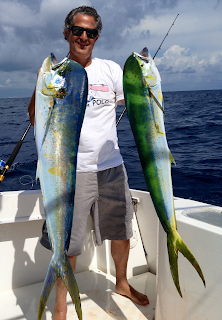