After preparing swordfish rigs for multiple hours the night before, captain and mate decided to sneak offshore and checkout the early morning blackfin tuna fishing. Bait was thick off the mark near bug at sunrise, so we spent some time loading up the wells with fresh liveys. An hour of throwing the nets and sabikiing had both wells thoroughly blacked out and fish boiling next to the boat. Figuring they were big jack crevalle, we pitched baits into the fray. Oddly enough though they were very large bonita. We hooked up to two and released them quickly so we could get to the edge. The weather was not in our favor for flying the kites, as heavy showers and light variable winds came through the area. The fish didn't notice the weather though and after setting only four flat rods and a deep rod in 120, the first flat went off. A short fight later had a keeper cero mackerel in the box. After the plague of remoras we'd been having recently it was nice to see the bonita back in action. A few doubles had us on our toes but we picked up the baits and headed deeper looking for a more quality fish. In 160 we set a spread of liveys and bump trolled our way south. Among the other normal TLD 20s and 15s we snuck a few 12lb class spinners in the mix, hoping for a fun fight on whatever ate the bait. Low and behold, something took the livey shotgunned off the small spinner. As Feder came tight it seemed like a remora had eaten the bait. But after two minutes of winding, the fish woke up and booked it to the bottom. Long deep runs, headshakes, and a steady throbbing tailbeat said blackfin tuna, and after a 20 minute fight Nick planted the gaff into a beautiful 25lb light tackle blackfin. 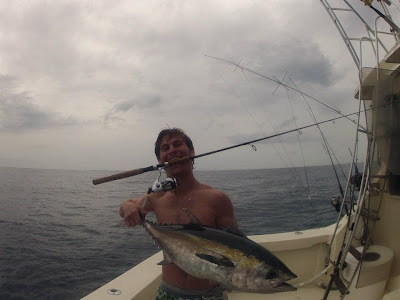 Moving deeper we spied a sail freejumping (180ft), so we popped a kite up and tried for a bite. Impatient and ready to get back to the dock, we had one more bonehead chomp a flat line bait before we headed in. On the way in we checked out a few more bait spots, but in the middle of the day they failed to produce. Final Tally- 5 Bonita, a few remoras, and a 25lb Blackfin tuna