Deep Sea Snapper Fishing in Miami with The Double Threat Crew is a night time adventure that is unlike many of our other trips. Tonight we trailered the Grady down to Blackpoint Marina to Launch South for some bottom fishing action. Armed with a bunch of spinning reels, a case of chum and 20lbs of oats, we headed out of Caesars just after dark and set up in 65' with a solid North Current. We had issues with our windlass so we werent able to set the anchor until 930 or so. We began chumming the area heavily and it wasn't long before the first mangrove came over the gunnel. As the night continued we were able to chum the Snapper all the way up to them chum bag, hookups occuring only seconds after letting baits back. This went on for the next 3 and half hours. There are a ton of combinations of terminal gear we like to try as we establish the chumslick. Some of us were armed with small jigs tipped with silversides, while others freelined a silverside back on a shortshank hook with a few split shots. Towards the beginning of the night more weight was needed to reach the fish holding deep below the chum slick. As the snapper got more aggressive though we were able to hookup with only the hook and split shot combo. In a few hours we were able to reach our limit of 35 Mangroves, all of them being solid fish between 2 and 5lbs. We also managed to box 5 yellowtail, and released another 25 snapper altogether. After the current slowed a bit we headed deeper looking for Yellowtail. We anchored in 90ft and began chumming heavily for an hour, only to raise one tail and a large lane snapper. The crew was tired and we had a long journey ahead of us so we headed back to the ramp, reaching Blackpoint at about 230 am. 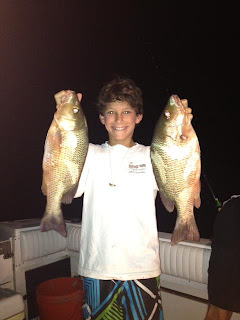 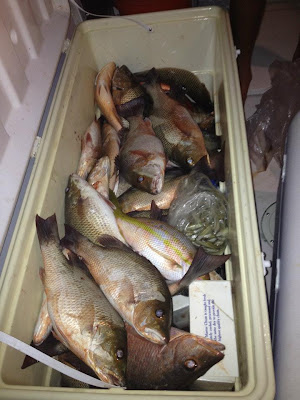