Today a father and son came aboard for a full day of Deep Sea Charter fishing in Miami. It was the first day without rain after the 4 days of torrential downpours. Bait was very tough in the chocolate milk water in the cut and off Key Biscayne. The edge was very dirty (often see this after days of hard east wind) and the water was green as far as the eye could see. (attributed to the rainfall more so than the rain) We ended up popping the kites up and just south of Fowey as the water color was a bit better after a difficult morning. The ice breaker was a bonehead... We had a cruising hammerhead eat a thready on the long and bite through the leader after a couple minutes. 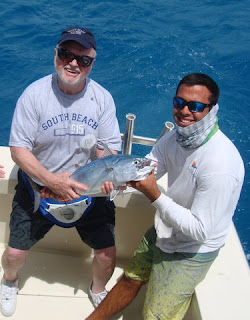 After a while longer we hooked into the meanest sail ever caught aboard the Blue Yonder. It was a small fish, about 35 pounds but it wasn't pleased about consuming a 3 inch pilchard and finding out it had a hook in it. We ended up hooking the fish in 230 and landing him in 450 after a 40 minute fight. He would jump then every couple minutes and ended up exhausting one angler on board and almost whooping the other as well. 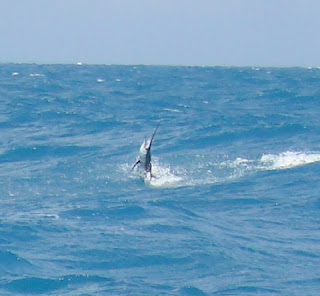 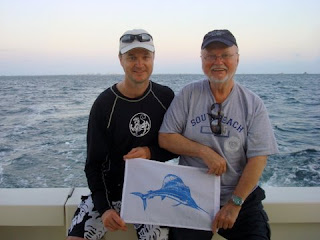 We popped the kites up again and caught 2 more boneheads and a small dolphin. After a while longer another sail lazily cruised up to the left mid and batted around the pilchard without really taking it. We called it a day after a while longer. Pretty slow out there but both anglers caught their targeted first sail and had a good time...