We were pretty pumped to be back out after a solid 0 minutes of sleep. We had new guests for this outing and we were once again optimistic about the sword bite. Swordfishing can be done by day and by night, but the thrill of daytime swordfishing Miami rivals none. Big fish are present, and the fishery can be done without losing sleep. Catching a fish the night prior definitely helped morale despite the sleep deprivation, and the attraction of boating a big swordfish pushed us forward.

Getting to the Swordfish

From where we were docked our target area was around 30 miles away. After departing the marina we made our way to the edge of the Gulfstream, finally slowing when we saw blue water. From here we trolled from the edge to about 500' and caught 2 football blackfin in the process. Already content with a bit of table fare and the skunk off the boat, we ran the rest of the way to the grounds. The winds were picking up out of the ENE and what started off as a 2 foot sea quickly built to a 2-4 foot sea. The winds definitely make daytiming more difficult especially when they run perpendicular to the contour. Crosswinds means more resetting and less time in the strikezone. The importance of setting up the right drift and getting up and down quickly is key. Most of the time during our swordfish trips, we try to be prepared to drop before we even get to our target area. Although this leaves gear out and available to fish at our convenience, it also makes boating fish on the troll a little more interesting. Tuna have to be boated and bled and dolphin need to be gaffed and boxed without wrecking any of our sword baits, terminal tackle, and conventional setups. Regardless, we still managed to boat a couple meat fish before we went all out on our sword drop.

Our first drift emphasized that very importance. Slight overcompensation for the wind had me situated a little too deep but we we still got down and soaked for a little while. I assessed our drift and was certain we'd spank the numbers on the next drop. We retrieved the bait (always fun with the reel crankie) and reset. Having no wind and 1-3 knots of current would define the most optimal conditions for swording. Fish in less current means being more conservative and keeping the bait higher off the bottom to reduce the risk of snagging the bottom and breaking off your rig. Today we had about a knot and a half of current, but the wind was the kicker. The wind picked up after we made our first drop, building the sea conditions around us. The day would prove to be less comfortable than we would have liked, but still more than fishable.

We dropped the bait and the waiting game began.. Nothing beats that gut feeling that you're in the right area. I had a close eye on the sounder and I liked the drift we were taking. The boat and bait were plying a gentler slope along the contours of the dropoff. About 10 minutes into the drift, we got our nibble. We took some cranks and played with the fish for a bit, but before long we were tight. We now had 1700' of manual cranking with an angry fish on the end. 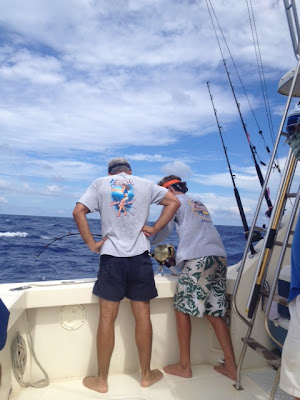 We kept him coming and it became pretty clear we had a decent fish on the end. He had a couple decent runs and didn't want to stray far from the thermocline. After about an hour and a half we got him to the wind on and took off the weight. Swordfishing during the day requires the use of a very heavy lead (12-20lbs) in order to contact bottom in over 1600'. 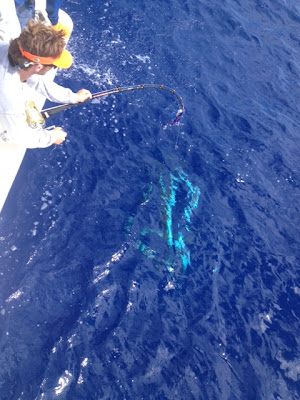 He didn't like the boat or the ugly dude on the reel so he took off. Not many fish off Miami can rip drag off an 80w quite like these fish. After 10 more minutes we got him up, stuck him with 2 gaffs. We slid a tail rope on him and pulled the fish through the tuna door. Definitely a solid fish. 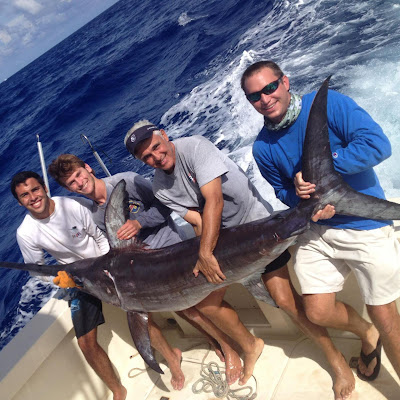 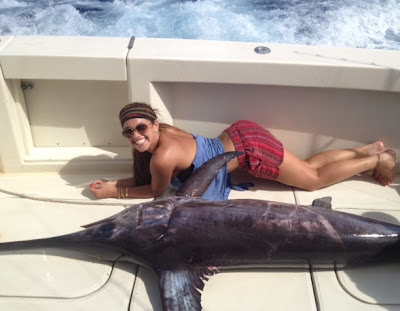 Miami Swordfishing gives individuals a chance to experience true big game fishing without crossing the stream to the Bahamas. Fall proves to be a fantastic time of year to have consistent shots at bites, but boating any unicorn still takes skill, practice, and teamwork. We were stoked after boating this fish, and after a couple high fives and celebratory pictures, we called it a day and headed in. Final tally- 1 swordfish (about 200 pounds) and 2 blackfin