Charters for Sailfish Tournaments in Miami

Fished a club tournament aboard the Blue Yonder. Charters for sailfish tournaments in Miami are always a blast from beginning to end. It was a one day event with sailfish being the target. There were 42 total boats fishing. There was a south breeze at about 5 knots and a trickle of north current. We popped up 2 kites with helium right off Fowey and began the waiting game. Our first fish was a 5 pound dolphin that one of our gogs couldn't escape. We bumped out to 190' after seeing a free jumper and this fish managed to find our spread. We popped him off as he swam at the boat for a quick release. After another long lull, we plucked another fish in 175'. (most boats were fishing shallower) We got a pic of this guy, though we didn't boat him. 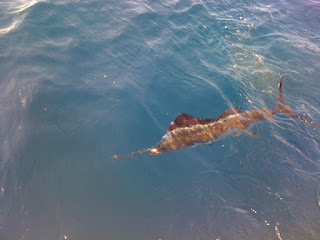 We kept at it and caught a 3rd little rat in 150' right off the can. Pulled him to quickly untangle the mess he made, then revived and released him. 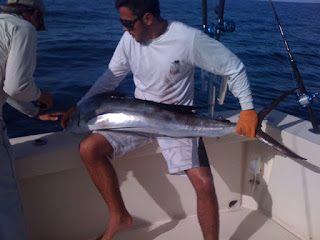 Both pictures were taken with a phone, so pardon the quality. We ended the day with 3 sails. Overall it was a slow day. The winning boat caught 5 out of Hillsboro inlet. (way north) 2 other boats caught 4 fish. (they took second and third) Us and two other boats split 4th place with 3 releases. Final numbers for the tournament were 51 releases for 42 boats, which is about a 1 fish average. Only 3 boats out of 42 caught more sails than us.