Charter Fishing in Miami allow for many different species to be taken with a variety of methods. Today we expected to bottomfish, kitefish, and drift fish for species like sailfish, dolphin, tuna, wahoo, and kingfish. We left the dock at 7:00 and headed to bug. We made quick work of the bait and got a few dozen threadfin and a bunch of pilchards in the well. We then made our way out to about 130', just east of Fowey. The wind was out of the east at about 15 knots and there was a trickle of north current. We popped up 2 kites and began the waiting game. After about 30 minutes, a big turtle surfaced in the middle of our spread. We had an instant double header of gaffer dolphin (they were following the turtle). We lost one near the boat, then gaffed the bull. 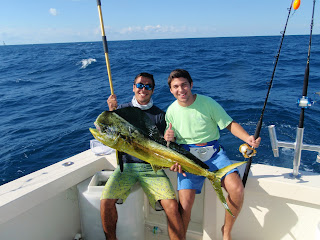 Ralphie was ecstatic with his biggest dolphin to date. (25 lb bull.) We reset both kites with fresh baits and after a while longer, we had a nice sail inhale the only pilchard in the spread. After a solid fight, we boated Ralphie's first sail. During the fight we boated a 5 pound dolphin as well. 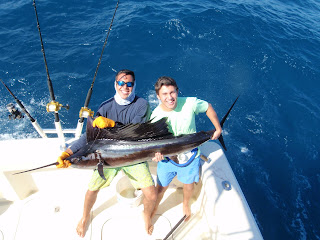 It was definitely a heavy fish. We then pulled the kites in and ran south to reset. (current slowed a bit further north) We popped the kites up again and began the waiting game. We had 1 cut off then a decent lull without any fish. After a few more minutes, we hooked up to a nice sail. Steve made quick work of the fish. We were now 2/2. 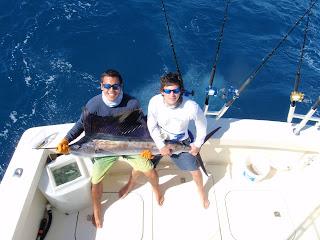 We ran back south again and popped both of the kites up. We kept raising the fish in a specific area and weren't about to jinx it. A couple minutes after we reset, we had a triple of sails. We caught 2/3, but didn't boat them for pictures. We were now 4/5 on sails. Sportfishing charters in Miami typically means using light tackle to boat large fish, and sailfish are an exceptional adversary on light tackle. 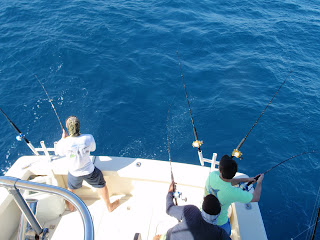 After the triple, we reset again and had a few kings sky our baits almost immediately. A little further down the line, we had a sail destroy the right mid and start greyhounding. This fish was pissed. He ripped off about 500 yards before Steve finally turned his head. We got him to the boat and popped him off, releasing our 5th fish of the day. We took one more drift, but the current was virtually non existent and the bite had shut down. We called it a day. We're now 13/17 on sails in the last 2 trips. Final Tally- 5/6 on sails and 2 dolphin (25 pounds and 5 pounds)