We got a late start and headed out for bait on a beautiful Saturday morning. There was a decent east wind and we were hopeful about the potential fishing conditions. It is late July and the summer pattern has set in with the exception of certain days when the wind kicks up. These days are a treat as you can catch fish you'd otherwise expect in Spring. Blackfin Tuna fishing in South Florida is ussually best during Spring, but as we know there are no fences, and fish don't follow calenders. In addition, you don't need to go far searching for dolphin because the edge can be hot.

We already had some nuclear pilchards in the well that I have caged up and I'd been feeding for weeks. We still opted to load up with more bait. Palm sized jacks were thick at Bug with a small layer of pilchards still holding to the south of the mark. They were tough to paint on the sonar but strings of 1-3 made it in the well anyway. Although the baits were small, we had plenty of them and headed to the edge.

We popped up the kites in 140 on an edge that had pushed in pretty tight with the incoming tide. Things looked promising but the radio sounded slow. We had some houndfish chewing on our kite baits and had to dodge a few remoras right after setting up. After a couple minutes we had a cutoff followed by a king we hooked up. We lost this fish right at the boat after he chewed through the leader. Shortly after we caught a decent cero mack on the left short. The edge was slowly moving out and in about 165 we had a double header. The first fish was a bonito but the second stayed straight up and down and seemed stubborn. After a 10 minute fight we gaffed a solid 20-25 pound blackfin. Blackfin tuna fishing in South Florida ussually calls for small hooks (size 4/0) and 30-40lb fluorocarbon leaders to fool these sharp eyed game fish, so it was a real treat to catch these suckers on wire leaders. 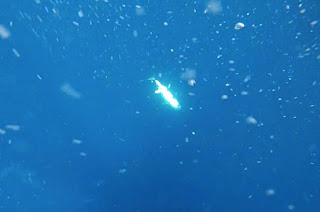 Right before we gaffed the first blackfin, the right short took off. After bleeding and putting the first fish in the cooler we tended to the other fish. After about 20 minutes, Grossman defeated the 30 pound tuna. 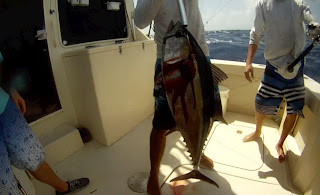 We moved back south and reset in about 170. I was hoping for a sail as the edge now looked pretty defined and the current was moving decently to the north. After several minutes, a timid sail nosed up to the right mid and engulfed the pilchard. He took off to the south but unfortunately spit the hook on the first jump. Shortly after, we hooked up to and landed our third blackfin. This one was 15-20 pounds. 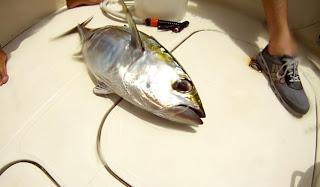 After about another 45 minutes soaking kite baits, another sail ate the right mid. This one wasn't as timid but unfortunately he spit the bait (the hook turned into itself, something that rarely happens with bridled baits). We called it a day because by this time we were right in front of Key Biscayne and he already had a cooler full of fish. 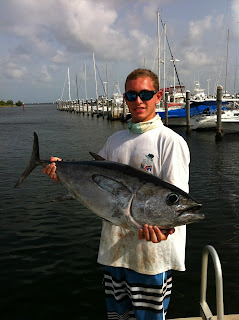 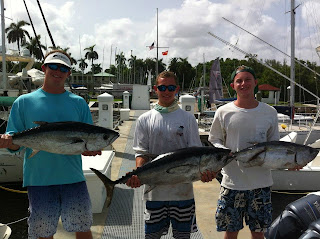 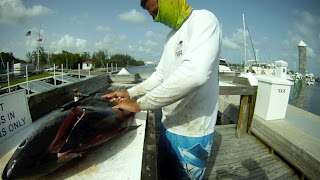