We left the dock at 2:30 for today's afternoon sailfish charter in Miami. We pulled about 3 dozen baits from the cage. After getting out a ways we realized the breeze had picked up from the morning providing perfect conditions to fly the kites. After stocking up on another few dozen Pilchards off bug, we headed south of Fowey to set the lines. After getting the first baits out, we knew the afternoon wasn't going to be easy. Remoras harassed any and every bait that hit the water, ranging from kite baits to flats and deep baits. One by one we pulled the sticky suckers over the side, having to reset kites numerous times over the first hour and a half. A few cutoffs on the flatlines had us rerig a few spinners with wire (we left fluoro rigs out for the ever present tuna), but again, the remoras beat out the kingfish to the baits. 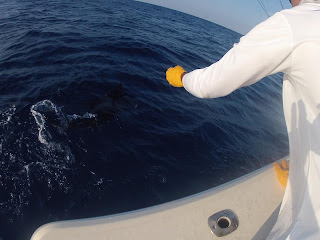 With the stiff breeze and dead calm ocean we decided to cut the engines and dead drift the kites. With our new rodholders on the bow, Nick and John worked three kite baits and four flat lines off the stern of the boat while Feder worked three more kite baits, 2 flats, and a speed jig off the bow. We continued bailing remoras and had a few houndfish raid the spread as well for the next two hours, when a sail rose to the mid kite bait. John dropped back and handed the rod to our angler Margaux who succesfully caught and released her first sailfish. 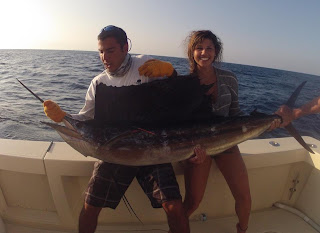 The fish was tagged and revived before it swam off strong. After getting the spread back out, a large houndfish decided to make short work of the mid kite bait again, giving the boys in the cockpit a handful. A short while later, Feder was dealing with a Remora and Houndfish double on his two flatlines when something snatched up a large blue runner on the long kite bait. After coming tight, another sail took to the air, but unfortunately spit the bait without finding the hook. With time waning, a few more remoras were released before calling it a day. 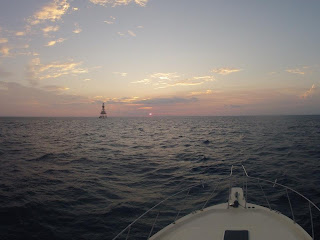 Final Tally for the Afternoon- 1 Sailfish, 7 Remoras, and 2 Houndfish