Not too many boats had been out this week. The winter rush of business or "peak season" usually begins around Christmas and lasts until the 4th of July. Either way, we got booked for a midweek half day and were hoping to make a report rather than hear one. The wind was blowing 15-20 knots out of the east and was pretty warm for late December. The plan was to get a solid amount of bait to kite fish for sails and maybe live chum a little bit. We went out of government cut and loaded up on big pilchards then got a few threads as well. The livewell was blacked out so we punched it to the edge. 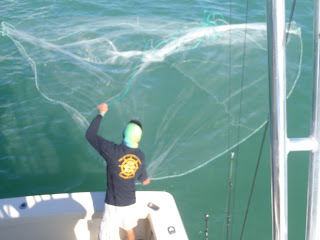 We went right out front and set up on a hard edge in 110'. There was zero current. Worked our way out to 190 and back into the edge which was now in 140'. Had one window shopping small sail and had a king sky our bait. With no other action to speak of, we made the decision to troll and find more life. Made it out to 350' and picked up a small blackfin. There was a solid amount of bait in the area and good north current. We popped up 2 kites and began the waiting game. (sailfish aren't traditionally caught in 350' but i'm convinced they have no depth sounder and the conditions looked right). 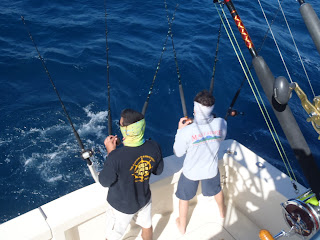 We bumped out way out to about 380' and picked up 3 dolphin on the way. 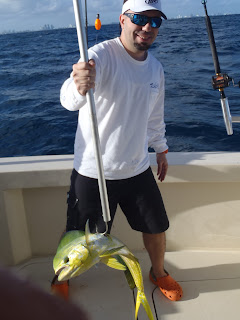 Shortly after in about 385', we got a double header of sails. One decided to greyhound toward the boat and the other went toward Bimini. After some careful maneuvering, we boated the first of the two fish. 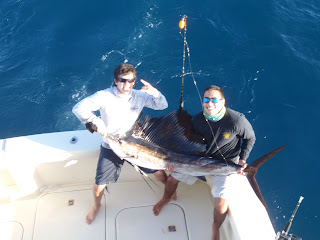 Our attention turned toward the second fish, which had ripped off an obscene amount of line. After a few minutes of backing down we touched the leader and snapped a picture. 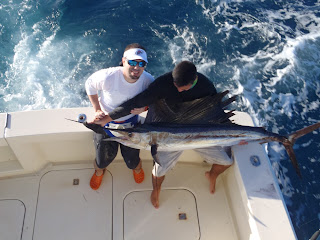 Popped up the kites for a few more minutes and got one more dolphin. 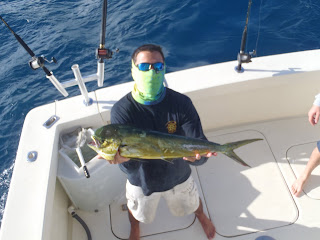